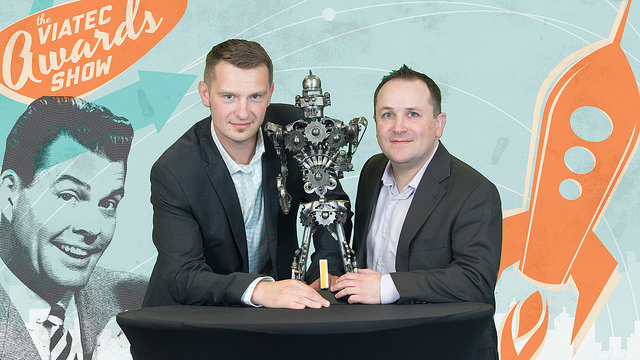 TinyMob Games, an independent gaming studio based in Victoria, was chosen as the winner for the Startup of the Year award at the 2014 VIATeC Technology awards.

The award recognizes a company less than two years old that demonstrates significant potential to generate revenue, raise investment, or to have significant social benefit. Five finalists were selected to provide a 45-second video pitch, with TinyMobs being chosen by an audience vote.

Founded in September 2013, TinyMob Games has grown from the original three founders (industry veterans from the likes of Electronic Arts, Zynga and Microsoft Studios) to a team of 16. The company’s first game was Tiny Realms, a mobile strategy game for iPad, iPhone and iPod touch. It’s currently in submission with Apple App Store Canada and is scheduled for release in the near future.

“It’s an honour to be recognized by the growing tech community here in Victoria,” said Alex Mendelev, CEO of TinyMob Games. “We’re very proud of the team we’ve assembled and the herculean efforts to be so close to launch in less than twelve months from when we founded the company.”

A release said the team are a group of “passionate gamers that include seminal titles such as the original X-Com series, Roller Coaster Tycoon, FIFA and numerous indie projects within its collective portfolio.”

The three founders of TinyMob Games were also part of the team behind one of the first successful free-to-play Facebook game studios that were later acquired in 2010.

Tiny Realms, the studio’s first game, gives the gamer more control than most strategy games, something founder Mendelev was intent on doing. It features deeper gameplay in the style of classic, real-time strategy games for iPad and iPhone, while gamers have direct control of troops and the ability to combine and mix units into Warbands for ultimate tactical planning. It pushes the boundaries of mobile technology, where player actions will affect the way the game develops over time.

If a player is truly a better gamer than their opponent, they’ll likely win. Games like Clash of Clans did an “incredible job” of carving out the genre of mobile RTS, but “people feel that if your skills are better, you should have a very strong advantage in the game in the sense that your results will be better than your opponents. And so we think that’s really where the fun in this style of game is, and that’s what we’re going for,” he told us in April.

The ‘Startup Growth Series’ showcases stories of entrepreneurs that have overcome obstacles in order to expand their businesses in Canada and abroad. In a…