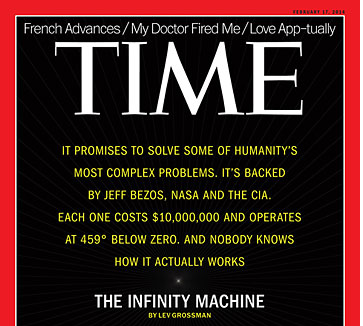 (And kudos to fellow tech writer Knowlton Thomas for reporting on this earlier today).

Founded in 1999, D-Wave’s mission is to “integrate new discoveries in physics and computer science into breakthrough new approaches to computation.” It’s backed by several high-profile investors, including Jeff Bezos, Nasa, the CIA, the BDC and Goldman Sachs, among several others.

“The Infinity Machine” as TIME dubs it promises to “solve some of humanities most complex problems”. It’s flagship product, the D-Wave Two is a black box measuring 10 ft. high, with a cylindrical cooling apparatus containing a niobium computer chip that’s been chilled to -459.6°F, “almost 2° colder than the Boomerang Nebula.”

Here’s a snippet from the article:

“The D-Wave Two is an unusual computer, and D-Wave is an unusual company. It’s small, and it has very few customers, but they’re blue-chip: they include the defense contractor Lockheed Martin; a computing lab that’s hosted by NASA and largely funded by Google; and a U.S. intelligence agency that D-Wave executives decline to name.

The reason D-Wave has so few customers is that it makes a new type of computer called a quantum computer that’s so radical and strange, people are still trying to figure out what it’s for and how to use it. It could represent an enormous new source of computing power —it has the potential to solve problems that would take conventional computers centuries, with revolutionary consequences for fields ranging from cryptography to nanotechnology, pharmaceuticals to artificial intelligence.”

This week, Hut 8 Mining Corp., a cryptocurrency mining and blockchain infrastructure company headquartered in Toronto, announced it would begin trading on the Toronto…