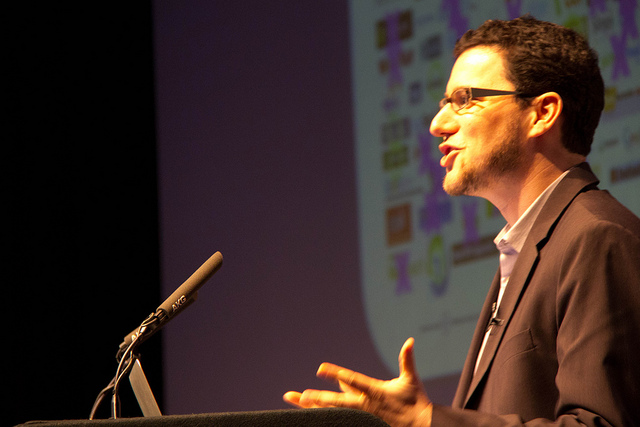 You could do worse in getting advice about building your first MVP than from the guy who literally wrote the book. Eric Ries, author of the bestselling Lean Startup book was on the main stage at the BC Tech Summit this week at the Vancouver Convention Centre, and hundreds in the audience seemed fixated on his every word. Lean Startup isn’t just a methodology – in this burgeoning west coast tech hub, it’s a philosophy – and like all philosophies, it starts with defining your terms.

Lean Startup isn’t just a methodology – in this burgeoning west coast tech hub, it’s a philosophy – and like all philosophies, it starts with defining your terms.

“Startups are experiments,” Ries said. “It goes back to the Minimal Viable Product.” This is common knowledge now in the startup venture world, but it’s easy to forget how quickly it has caught on, as many of our assumptions about how businesses should be managed go back to the theories of scientific management from the 19th century – not all of which are necessarily sound in today’s world. Indeed, Ries reminded his audience just how recent Lean startup methodology is – and why relatively few companies have caught up with it yet.

“Most startups I’ve been involved with have been failures,” Ries added, warming to his subject. “I know you’re not supposed to say that, but as a professional expert, I’d like to blame Fred Taylor. His system is basically what we’re still using today. Someone made these rules – for example the idea that we could study work to find the best way to do something more efficiently – and then reward higher productivity. It’s may seem hard to believe, but in the early 19th century, employees were punished for innovating productivity improvement. The employer would say, obviously, they were holding out on this good process – so they were punished for it, docked pay and so on, along with everyone else at the company who wasn’t using the better process. Will people make fun of us 100 years from now for our own ridiculous management tools?”

And even now, with the growing popularity of the methodology, there’s plenty of misunderstanding, Ries notes. “The pivot is just one aspect of the Lean startup toolkit that is confused by mythology of genius founders pictured in movies, where we gloss over the fact that the initial idea for the company was actually pretty bad. Things get chaotic and difficult, but they’re able to pivot,” and keep grounded in one aspect of the business, changing the plan or strategy, without abandoning the overall vision.

For Ries, understanding the importance of the pivot is key. “The way to think about startup runway is not how much money we have left, but how many pivots do we have left? Can we increase them by shrinking the time between pivots with the help of validated learning?”

But then, even if your board and other stakeholders are backing you in theory, this ‘validated learning’ isn’t valued the same by everyone. “If learning will be our unit of progress, there’s a problem. Public companies can’t put in their shareholder letters that they ‘learned a lot this year’. Learning is potentially a way to BS your way through – so how do we know you’re telling the truth?” It’s this question that contributes to the entrepreneurial mentality that we can’t admit doubt or that we have assumptions that haven’t been tested, Ries notes. “It’s easy to deceive ourselves that we’ve learned everything we need to know to be successful.”

Nonetheless, the Lean startup has caught on, creating a kind of self-perpetuating inertia, Ries adds. “The way we advance ecosystems is when entrepreneurs hold each other accountable and push each other. It’s easy to believe your own propaganda. If you look at the wider business world, we’re still in early days: corporate resources are squandered. But that’s changing.”

What’s the one thing many entrepreneurs get wrong about the Lean startup methodology? “People think MVP means a small product, like an app that you can build in three days. Actually, it’s just getting the time down from 6 years to 1 year of development, or $2 million to $500,000.” It’s about getting better, faster, cheaper.