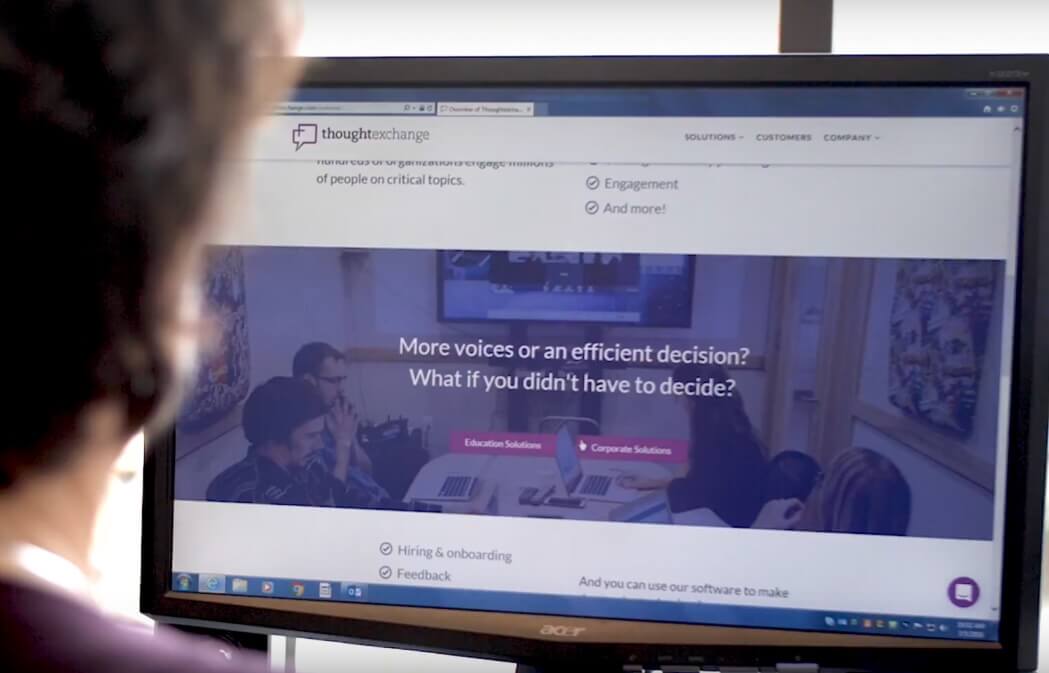 Thoughtexchange, a British Columbia-based startup that has developed what it calls a “crowd conversation tool” for leaders, has raised $10 million CAD in an extension of its Series B round, which closed with $20 million in December.

“It’s never been more important to have open, transparent, and bias-free conversations.”

Thoughtexchange raised the additional equity financing, just over six months since announcing its Series B, due to “surging growth.” The funding brings Thoughtexchange’s total capital raised to date to $41 million.

Amid COVID-19, Thoughtexchange said it has seen platform usage increase by more than 600 percent since March. The company attributed the massive growth to leaders requiring “new and dynamic ways to connect and scale virtual conversations with their teams and communities.”

Dave MacLeod, CEO at Thoughtexchange, told BetaKit the company plans to use the new capital to “fuel expansion and innovation.”

“[It] seems like the world suddenly needs Thoughtexchange and we want to make sure we’re evolving and gaining market share as fast as we can,” he said.

“We’ve seen an entirely different workplace emerge over the past few months and many of the old business practices won’t exist into the future,” said Robert Antoniades, co-founder of Information Venture Partners.

“The future of work demands new tools. It will require transparency and open interactive communication about more issues than ever, not just with employees, but customers and all stakeholders alike,” Antoniades added.

Thoughtexchange’s software allows leaders and employers to ask open-ended questions to groups ranging from 10 to 100,000 people. The software then uses data analysis and artificial intelligence to provide insights to leaders helping them create organizational change. Use cases include revenue leaders learning what sales teams need to meet their targets, or development leaders learning about what’s important to those undergoing organizational change.

“Our usage growth is a result of leaders in all sectors prioritizing how they scale up conversations digitally.”

The product’s users include Fortune 500 companies like Allstate Insurance, McDonald’s, and American Airlines, in addition to companies like Looker and Frontier Communications. Founded in 2009, Thoughtexchange’s team currently sits at 140 people.

Thoughtexchange’s surge in growth was followed by what MacLeod called “a few very scary weeks” in March, when Thoughtexchange, like many companies at the beginning of the pandemic, experienced “extremely slow” new business sales. MacLeod noted that the decrease in sales hurt the company’s first-quarter results.

However, the Thoughtexchange CEO told BetaKit the company began to see usage climb “fast” in mid-March, with sales recovering in April. “Now we are exceeding revised projections and looking to add to the team,” he said.

“Our usage growth is a result of leaders in all sectors prioritizing how they scale up conversations digitally in the remote economy caused by covid-19,” MacLeod said of the 600 percent growth. “Whether it’s startup CEO’s [sic] asking employees what their remote challenges are, the largest corporations in the world re-imagining learning or school districts conversing with parents about safely returning to school in the fall, inclusive online conversations are suddenly gaining recognition as the way to learn what everyone thinks and to build trust while doing so.”

Due to the increased use of Thoughtexchange’s platform for remote communication, the startup began to have challenges around maintaining and scaling its tech infrastructure. The startup also had an increased need to support customers. These led to the need to raise additional capital to support its technology and employee growth.

“Understanding the most important things that need to be addressed right now and tapping group intelligence to inform critical decisions has proven vital for leaders,” said MacLeod. “It’s never been more important to have open, transparent, and bias-free conversations within our teams and communities and we’re incredibly excited to be at the forefront of enabling those for so many.”

With plenty of apps and tools out there to help users share what they’re up to via text, photos, or videos, Moment.me is looking…