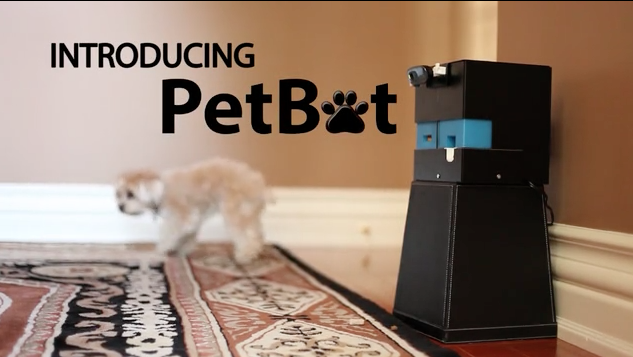 Pet people are crazy. I know this because I am one of them.

It’s a good kind of crazy. The kind that means you will do just about anything to make your little fur-baby happy; less of the kind that convinces you to dress your cat up in tights to make her look like she has human length legs.

And Canada is fully of pet crazies – about half of Canadian households own some kind of pet. Canadian pet owners make up a whopping $6.5 billion-a-year business opportunity for an industry that includes anything from clothes, houses, couches and food. Soon to be added to this list is Fido’s very first robot.

PetBot is a pet communication slash treat dispensing device that lets you to see, talk and feed your pet from your smartphone. It is perfect for you to keep an eye on your pet to make sure they are safe. It can also ease the pain and guilt we all have when we have to leave home alone while we slave away at work to make money necessary to buy them things.

The wireless robotic cube has a remote-controlled live webcam which can be moved up and down either online or via an app allowing you to interact with your dog.  You can either speak to your pet live via PetBot or set it up so that it plays a pre-recorded sound clip before dispensing a treat.

My favorite feature is the image recognition software which detects and selectively sends you photos of your pet when they get close to PetBot. For me, getting a selfie of your dog as a text is the ultimate sign of the future.

The Toronto-based team behind PetBot is currently raising $20,000 on Kickstarter to get their first batch of PetBots out the door just in time for Christmas. The campaign is already a quarter of the way to meeting their goal in just one week since they launched.

Earlier this year, a similar device, Petzila, raised over double the amount they were funding on Indiegogo. The $30,000 campaign finished at just over $79,000 early in September. Like PetBot, the Petzila also provides communication and treat dispensing. Their units are also expected to ship in December of this year but the backer price was significantly less starting at $99. Albeit the functionality did not seem to be on par with PetBot.

PetBot has been extensively tested and created with dogs in mind. But in anticipation of cat owner inquiries, BetaKit confirmed with PetBot that their device can indeed be used with cats. That being said, the company did indicate that testing with cats is limited and the feedback is mixed and that they are currently in the process of getting our product out to more cat testers.

PetBot’s Kickstarter video, that will be sure to tug on your heartstrings with the adorable pup and romantic comedy/coffee house soundtrack, can be watched below.

CONTEST: have your say at #TechVAN on February 23

TechToronto has expanded to the West Coast, with its inaugural TechVancouver event sponsored by Lighthouse Labs, happening on February 23 at 6 pm at…