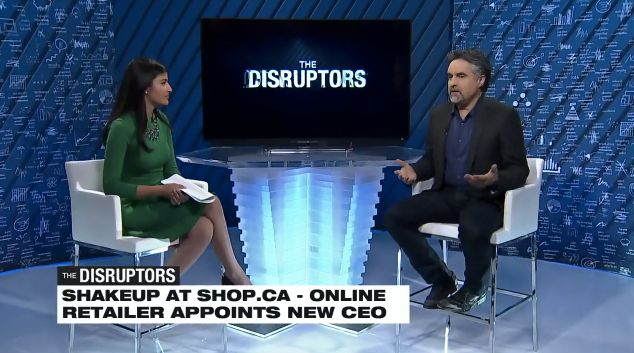 On today’s episode of BNN’s The Disruptors, co-hosts Amber Kanwar and Bruce Croxon exclusively reported that former Shop.ca CEO James Haggarty, who was COO before moving up to CEO in April 2014, has been replaced by Shop.ca board member Tony Chvala.

Chvala is a Chicago-based executive who has held high-profile positions at ecommerce companies in the past, including acting as GM of private label and global sourcing at Amazon in 2010, Global GM and chief marketing officer of Groupon, and vice president of ecommerce marketplace and site advertising at Sears. Chvala’s experience in ecommerce, merchandising strategy, private label, and product innovations spaces make him a well-suited choice to take helm of the compay. Chvala has been a Shop.ca board member since August 2015.

Haggarty is no longer at the company, co-host Amber Kanwar reported, and she said that Shop.ca is “trying to make its own mark in a world dominated by Amazon.”

Kanwar said that it was likely that performance was an issue. “Chvala comes from the United States, has had experience at Amazon and Sears — so no stranger to struggling retailers. His laser focus is on bringing down marketing expenses, they are now selling 300,000 products which is down from 15 million, and one of the key things he’ll be focusing on is disruption. How can you create a truly disruptive retailer in Canada?” she said.

Co-host Bruce Croxon said that the news didn’t surprise him, but that there was a “flip side” to the story. “In Canada, generally, if the founder is Canadian, if you run into trouble there, we’re selling,” he said. “But we’re starting to get some depth of talent so if someone’s not cutting it, we’ve got some talent to come in and take over.”

BetaKit is a production partner on The Disruptors.

Machine learning engineer among Indeed’s jobs to watch in 2018

Based on growth in 2017, job site Indeed has released a report on the top jobs to watch in 2018. Jobs enabled by tech…