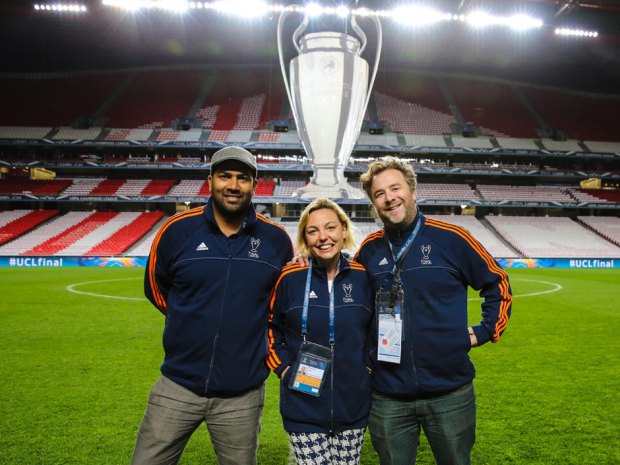 When one initially tries to enter Circo de Bakuza‘s website, a authentic-looking warning warns web-surfers that they’ve reached “the end of the Internet”. Once “yes” is clicked, the Montreal startup’s fancy website is finally revealed. Perhaps only a company that calls the UEFA Champions League series a client does these sorts of things.

Yesterday’s Financial Post revealed that the May 24 soccer match between Real Madrid and Atletico- otherwise known as the UEFA Champion’s League Final- had a Canadian startup connection. It was also viewed by over 165 million viewers from around the world.

A local Montreal startup called Circo de Bakuza, which is a creative agency specializing in events, branding and experiential marketing. They won the rights to produce what UEFA president Michel Platini eventually called “the best Champions League ceremony he had ever seen.” That ceremony involved 400 volunteer dancers, 90 vocalists and Portuguese celebrities, including singer Mariza and soccer star Luis Figo. The company even brought in England-based choreographer Wanda Rokicki, who has worked on many international events such as the Olympic Games and FIFA World Cup.

In the end it was six months of preparation and $740,000 worth of spending for a seven-minute show.

The startup, which has its office on Ave Mont-Royal in Montreal’s Plateau neighbourhood, was founded after founder Vincent Drolet and VP Roshan Soomarchun met while working together on the Dubai Film Festival a year earlier. Drolet also previously worked on Cirque du Soleil.

Today the Montreal office and the company’s second office in Paris split about 20 employees. Circo de Bakuza organized several events for the Euro 2012 championship — the most notable being the final draw in Kiev, Ukraine, wrote the Financial Post, and Soomarchun said the company’s revenue is nearly $9 million.

“In the past four years, we really doubled our turnover year after year,” he told the newspaper. “All this [growth] happened by expanding the variety of our services.”

Interesintly, Drolet said that “the economic crisis was the catalyst for growth in the luxury products market”. “The big brands, since 2008, saw their marketing budgets drastically reduced and they turned to smaller agencies like us,” he said. “It was a chance for us to show off our creativity and for our clients to get better returns on their investment.”

Now the company’s execs have their eyes set on Morocco, host country of the FIFA Club World Cup in December and the Africa Cup of Nations early next year. Drolet wants to bid for ceremonies at the Euro 2016 championship in France, the 2018 FIFA World Cup in Russia and the 2020 Summer Olympics in Japan.

“It’s a long way up the ladder but the Champions League final was definitely the first big step towards producing those major events,” he told the Post. “I think we’re in a good position.”