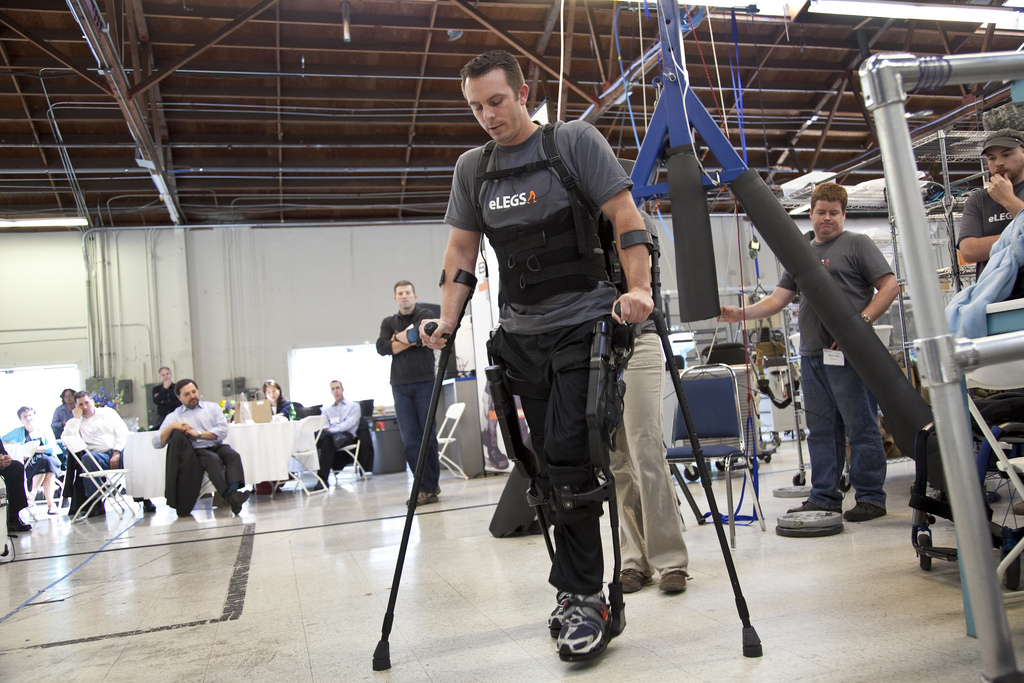 For many, the term “wearable technology” evokes thoughts of step counting and wrist-vibrating notifications. But the potential for wearable tech goes far beyond fitness and checking your email on your wrist. As the first wave of computing to get full access to our bodies, wearables have the ability to augment our physical selves, and for people with disabilities this integration is life changing.

Ottawa’s eSight has developed eyewear that is helping the legally blind see again. The company’s electronic glasses use breakthrough video technology that essentially allows wearers to enhance and modify what they are seeing in real-time. The eSight system includes an OLED equipped headset that captures and displays video in real-time, as well as a controller, which lets the user adjust every pixel of the video to help them see.

eSight’s eyewear addresses some of the most common vision loss conditions, including macular degeneration, diabetic retinopathy, Stargardt’s disease and some forms of glaucoma. The company is on a mission to make “blindness history” and its technology has already changed the lives of many as told in a series of extremely powerful videos on the company’s website.

Whereas eSight is aiding the visually impaired to see, fellow Canadian company, StudioFeed, is using its wearable technology to help the hearing impaired experience sound. Studiofeed’s mission is to move people closer to music, and one of the ways it is doing this is through its wearable tactile audio technology called SubPac. SubPac transfers low frequencies directly into the users body to give a physical dimension to a music experience essentially allowing its wearers to “feel” sound.

SubPac is finding success with its device in the music industry, with DJs and producers using it to experience their tracks and mixes as if they were being played at the club. But SubPac’s device is also being used to help the hearing impaired. Last year, SubPac teamed up with The Muse Seek Project, an organization that aims to open up the world of music to deaf children. Together, the duo gave children in the Dominican Republic a new physical experience with music.

Communicating through touch is also something Apple has done extremely well with its taptic engine on the Apple Watch. Apple is known for its focus on accessibility, and the Apple Watch features many assistive technologies for both vision and hearing. Perhaps the most inspiring example of this is was documented by 9to5 Mac of a young girl who is both near-blind and deaf, named Molly Watt. Molly uses the Apple Watch to communicate to her friends by tapping her own code-like language using Digital Touch, which especially comes in handy in situations where she feels unsafe or uncomfortable. Molly also uses the taptic engine of Apple Maps on the watch to navigate around the city.

Using haptics to navigate is at the core of Ducere Technologies’ first product, Lechal. Lechal is a pair of smart shoes that communicates to its wearer through haptic feedback. The footwear, which is offered as either smart insoles or smart shoes, provides turn-by-turn route guidance via haptic feedback, which means users can get around the city without the need to look at a display or hear audio cues. Ducere’s goal with Lechal is to help the visually-impaired navigate their world better one step at at time.

Taking steps is something Ekso Bionics is enabling for survivors of strokes, spinal cord injury, and other forms of lower extremity weakness. Ekso Bionics has developed a bionic exoskeleton, or wearable robot which is helping people stand up and walk again. Ekso is a gait training exoskeleton, which means that walking is achieved by a user shifting weight to activate sensors in the device which in turns initiates steps. Ekso’s technology is being used to provide people with complete paralysis a means to stand and walk, as well as helping patients in rehabilitation re-learn proper step patterns and weight shifts. Here in Canada, Esko Bionics has partnered with ABLE BIONICS in London, Ontario, and Glenrose in Edmonton, Alberta, to help facilitate the purchase of the exoskeleton as well as offer gait rehabilitation with the device.

Giving people who have limited mobility or difficulty speaking a voice, including those with ALS, Cerebral Palsy, and brain injury, is what Peterborough’s TAPS is doing. A division of Tappur, TAPS is a trigger activated personal assistant that is built upon the open-source Drumpants wearable controller. Users place the soft flexible pads on their body or attach them to canes, wheelchairs or other assistive devices and configure phrases to each. When the soft pads are tapped, the phrase is triggered on the companion app via Bluetooth.

TAPS, like the other wearables, enable individuals by augmenting their physical capabilities. At its core, this is what wearable technology can offer over the waves of computing before it. By integrating technology as part of ourselves, it can be used to help us walk, see, hear, speak, and feel. For many, this is life-changing.