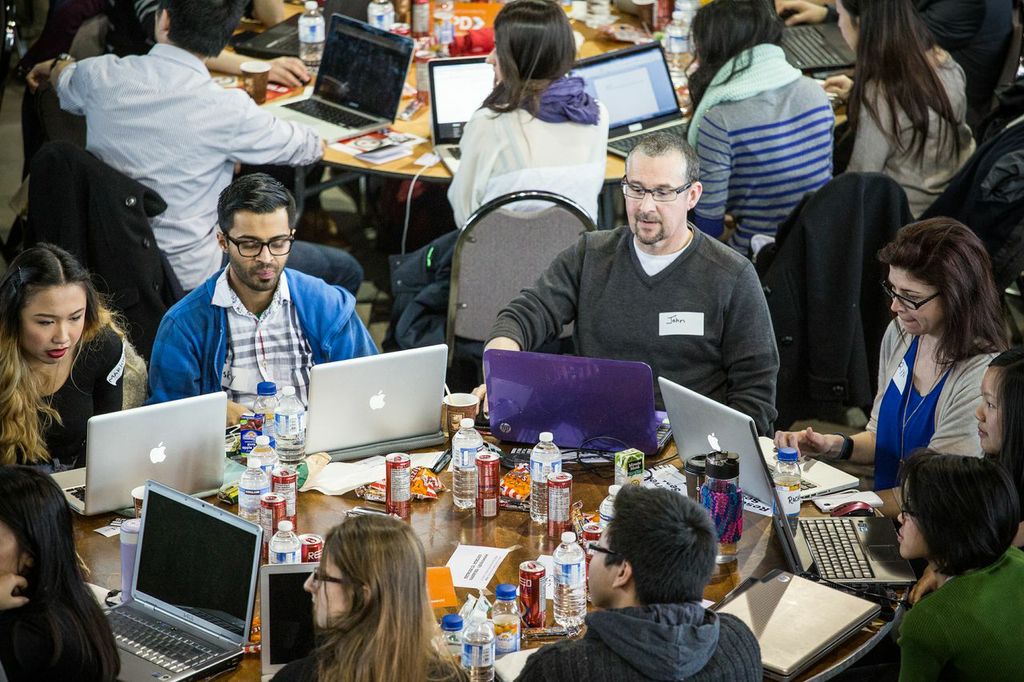 Having been a non-technical startup co-founder, I was all about the business of winning friends, influencing people, telling a great story, and doing the beer runs. The coding was my co-founders magic. I hear how everyone should code. I get it. It’s important, but the notion is a little hyperbolic. We need more people learning to code for sure. But, we still need skilled trades people too.

Boomer. The passport says I’m two years on the wrong side of 1964. The grey hair staring back in the mirror proves it too. I’m an old dog. Don’t shoot me yet, because I’m all about learning new tricks. Attending the #HTML500 event is my ongoing commitment to lifelong learning. I write, but I’ve never written a line of code. No time like now to dive right in.

Participating in rather than just observing the largest open access education event in the history of Vancouver, was an amazing personal experience. Thanks to the team at Lighthouse Labs, a small army of volunteers, a great ensemble of developer teaching assistants, and an impressive group of committed industry partners, it proved to be a most rewarding day.

Seeing such unbridled enthusiasm impressed Andrew Wilkinson (BC, Minister of Technology, Innovation and Citizens’ Services) saying privately, “it’s wonderful seeing 500 people looking for their fast track into the tech industry. We’ve got a tech industry in Vancouver and BC pretty much at full employment. We need these people to be trained up to provide us with the developers or the entrepreneurs of the future.”

The #HTML500 was about inspiring more people to learn how to code. Teaching 500 people HTML and CSS in one day, for free is a massive undertaking. The organizers are sending a clear statement to Vancouverites, Canadians and the world that it is easy enough to learn basic coding. The event was also about creating awareness among non-coders that there are many opportunities in Vancouver’s fast growing tech industry. There’s the reality that many developer jobs are going unfilled. There’s big demand for talent.

There’s evidently a big demand to learn how to code as well. Close to 1000 people found themselves on the waitlist. They’re now eagerly awaiting the next event. The day was also impressive for having close to 60% of the attendees being women. For Lighthouse Labs cofounder Jeremy Shaki, seeing this diversity “really reflects the revolution going on between graphic design and the creative side of coding. It’s an integral reason why more women are really starting to connect with it in ways they haven’t in the past.”

Lighthouse Labs professor Khurram Virani, led a morning lecture. We then had 3 hours of ‘lab time’. Having the choice of two projects, we followed a well structured set of step by step instructions. Working on a simple recipe page was an interesting process. At any given moment it was like feeling excruciating brain pain, “where’s my dunce cap,” to an exhilarating rush of “I get it”. The TA’s were a huge help too. Their boundless patience was sincerely appreciated.

When I did lift my head, it seemed like everyone was fully engaged, and having fun. The energy from ah-ha moments, and the high-fiving around me were feel good moments. After one day of basics, I don’t foresee giving up writing stories for writing code full time. While my final project isn’t a thing of beauty, it feels good proving this old dog can learn new tricks. The #HTML500  is leaving me with both a deeper appreciation of coding, and a foundation of knowledge for future personal projects. At least I can avoid creating anything like these web designs.

Dash Robotics, creators of Dash, the the world’s first foldable, programmable origami robot that you can build yourself, has officially crowdfunded their project yesterday afternoon…