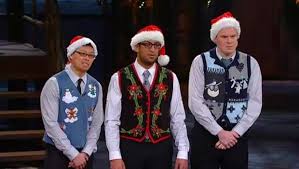 A trio of University of Calgary engineering grads decided to sell ugly christmas sweaters online last year and it worked out well for them. They found a good supplier, bought the faddish sweaters for $6 each and in about six weeks sold 770 of them for $40. This year went much better.

That stat alone was enough to get the CBC’s Dragons’ Den investors hungry for a piece of the pie, when the show aired Wednesday night. The episode was actually filmed back in April when the cofounders told the Dragons that The Holiday Rejects, with brick-and-mortar outlets now in Calgary and Edmonton, were looking to sell about 3,000 this year.

Things went a little better than expected. “We’ve done over 5,000 now. With last week’s sales we’re probably projecting to do close to 7,000,” said cofounder Chris Cheng. A little quick math indicates that if the trio hits 7,000 sweaters, they’re looking at nearly $240,000 revenue. Take away all the business costs and its still a decent amount of money earned. Last year the trio made $31,000 after selling nearly 800 sweaters.

Cheng, Adil Hooda and Kyle Fitzgerald started the online store last year and eventually were forced to turn their Calgary house into an impromptu store. Every sweater is second-hand and catalogued on the site.

We just had so many customers that wanted to look at the sweaters and try them on,” Cheng told BetaKit. “We were selling them out of our house, out of a single clothing rack and it kinda just blossomed from there.”

Cheng doubles as a professional engineer while Hooda and Fitzgerald are full-time entrepreneurs. Cheng said he doesn’t know how long the ugly Christmas sweater fad will last (something that Dragon Bruce Croxon brought up during the show). They’re simply going to ride it out, figure out how well they did in the new year and decide if opening another location makes sense. Going from online to brick-and-mortar stores increased the business’s costs severalfold, said Cheng, and they’ll have to decide if it’s worth their time and money.

It started when the three cofounders attended an ugly christmas sweater party a few years ago and couldn’t find an adequate garment at the standard thrift shops, like Value Village and the Salvation Army.

When they went into the ‘Den to pitch the wealthy Canadian investors, David Chilton, Jim Treliving and Kevin O’Leary offered them $30,000 for a 30 percent royalty until the guys could pay back the money, and 10 percent royalties after that.  Unlike many Dragons’ Den deals we see that eventually flop after due diligence, the deal actually did go through. Cheng said it wasn’t closed until September.

But with people so keen on ugly second-hand Christmas sweaters, will their supplier ever run out?

“It’s definitely possible,” said Cheng. “They almost always do by the end of the season. They’ve got quite a few stores buying from them so we kinda have to take a risk and order a lot more at the beginning of the year just to make sure we have adequate supply for the selling season.”

Here’s to an hearty supply of awful holiday sweaters in 2014!

#TechVAN: Annalea Krebs on getting past bad startup days

As an entrepreneur, what was your worst day in a tech startup and how did you get past it? When do you pivot, and…