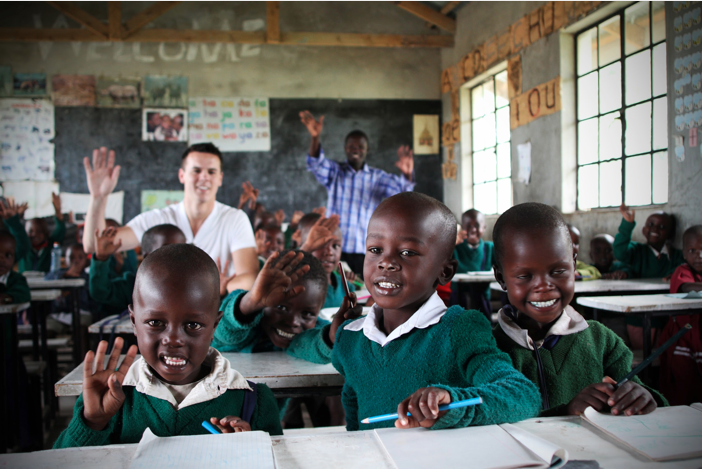 Congratulations. You’re reading this, which means you’ve attained some level of education.

For some, education is like a pre-ordained right. In reality access to education for many children isn’t even a pipe-dream. Without an education millions of children are destined to a life of abject poverty.

For Taylor Conroy, founder of ChangeHeroes, education is the ticket out of poverty. He and the team are driven by the audacious goal, “to one day see a world where every child has access to education, and sparking change in the developing world to halt the cycle of poverty.” They want 100 people to fund 100 schools by the end of October.

ChangeHeroes works through “friend-funding,” making it easy for one person and 33 friends to donate $3.33 for 33 days, with the goal of raising $10,000.  That amount of money is enough to fully fund major projects in the developing world, including the construction of a new school, well or library. In Canada in 2007/ 2008, the total expenditures per student in public elementary and secondary schools averaged $10,678, according to StatsCan. As Conroy see’s it “building 100 more schoolhouses will serve 100,000 children over the next 20-30 years, and these children are ready to learn to read, write, count; to learn about gender equality, family planning and how to prevent diseases like AIDS.”

Having spent most of this year building the team, and fine tuning the platform, ChangeHeroes is ready to ditch their training wheels and make a significant impact on the lives of many children.

They are doing this by challenging everyday people to join their #100Heroes campaign. By bringing  together 100 people for the heroic purpose of fundraising $1 million in six weeks, 100 new school houses will be built in Kenya through their partnership with Free The Children. In fact, since quietly announcing the #100Heroes campaign to select pioneers on September 2, the platform has already raised over $120,000, (increasing by the minute) and on September 17th they’re officially inviting the public to join the campaign.

“#100Heroes isn’t some campaign,” said Conroy. “It is the manifestation of a dream four years in the making. In 2009 I looked into the eyes of a young girl living in the most impoverished place I had ever seen, and silently made her a promise. I promised her I wouldn’t forget what I had seen. I promised I would do everything I could to change things. I was born in a city with clean water and every opportunity in the world, and her, a village saturated in poverty. That is the only difference between her and I. #100Heroes is the beginning of my fulfillment of that promise. And I am humbled to my knees thinking of this all coming to fruition.”

With the launch of #100Heroes imminent I caught up with Conroy for a little more insight:

Q: What have been the biggest and most unexpected surprises so far?

“I did a talk at a big church in my hometown a few months ago. I thought it was a cool little gig and was happy my parents and sister would be able to come. The place was full of old friends I hadn’t seen since high school. Little did I know, there were also three Disney employees in the audience. They liked the talk. So much so that they had me in to speak to all of the employees (300) at Disney, and they decided to run a corporate campaign where nine employees would all aim to build a school each. That was a huge surprise.”

Q: What or who helps keep you only semi-delusional (versus totally delusional)?

“I don’t like semi-delusional. I am totally 100% delusional from most people’s perspective. I believe wholeheartedly that this is the time in our world’s history where we eliminate extreme poverty (as a start), and create a world that is safe and just for all of us. Do I think Change Heroes will change the world? No.

Do I think the idea that is being manifested as Change Heroes will change the world?

I know it will.

I know it will play a part in the incredible opportunity that is right in front of us. There are groups like Avaaz, Purpose.com, Change.org, and many more that have millions (40M+ to be more precise) of people that take social action regularly. So “the crowd” is there. With crowdfunding emerging as the new way to bring in vast amounts of funding for social causes, it is only a matter of time until those crowds become focussed on specific problems, take massive action, and solve them. Just imagine if we could ensure that every person that took action resulted in $7500 of funding for social good. Imagine the change that could occur when 100,000 people all bring in $7500 each to change the world.

Stop imagining. It is here. That’s what we do. It is not “OUR” idea. It is an idea whose time has come. We just get to be a part of it.

Get ready for change. Big change. Never ever before seen or imagined change. It is here and it is happening. Now.”

While #100Heroes connects individuals, it’s worth noting that ChangeHeroes also facilitates corporate campaigns as well. They were granted the opportunity to work with organizations such as delibrateLIFE, Amazers.org, CV-4D, and Disney Club Penguin.

Furthermore, the team have been able to translate many lessons learned through being part of several Vancouver-based accelerators including the Coast Capital Savings Innovation Hub (part of UBC’s Sauder School of Business ISIS Research Centre), Launch Academy, and institute B, into a friend-funding platform that can empower friends or coworkers to make a difference in a child’s life.