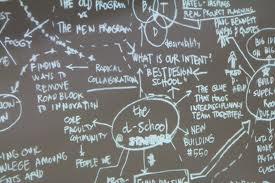 This article was written by James Colliander, Ian Fordham and Aron Solomon.

The conversation began, innocently enough, in London, between two jet-lagged Torontonians and their most amicable British host.

As the three of us dove into the world of education innovation and technology, we began to talk about what trends and, well, things we see emerging over the next decade.

These are the ten themes that will define the next decade of EdTech. (One caveat for our readers: We’re not advocating that all these things are great things. We’re sharing with you how we see things unfolding.)

1. Collaboration: We see a greater sharing of content, pedagogy and practice. The “sage on the stage” is being replaced by an integrated team of professionals organizing a symphony of learning. (One example is Teachmeets in the UK, where teachers self-organize their professional development)

2. Mobile: With the ability to truly connect a world of learners, mobile will drive new content delivery methods, information sharing and feedback – particularly in developing nations. Instead of writing an essay in isolation about a remote event, students interconnected by mobile can research and learn from each other. (Example: Celled)

3. The In-Between Spaces: When we think and work in the “in-between spaces,” we’re toiling in very fertile ground for education. We envision the re-imagining of the spaces between public and private education, online education and the intimacy of in-person community, synchronous and asynchronous, existing and emerging tools and platforms and the promise of tomorrow, and the critically important space between MOOCs and global accreditation of programs. (Example: Cambridge University Press / Raspberry Pi Foundation Computer Science MOOC

4. Personal Authorship: Curating, creating, and memorializing your own education will ultimately trump pedigree. (Example: Experience Institute, Pathbrite and Degreed) The path from pre-kindergarten to graduate school is no longer confined by geographic access. The granular portfolio of learning opportunity selections made by students will become more important than the names of the institutions they attended.

5. Digital Literacy and Inclusion: Empowerment across the age spectrum as devices become ubiquitous and the digital divide is staring to be closed. Digital literacy is seen as an integral part of the curriculum and coding as a vital skill for 21st Century jobs and work based learning. (example: Codeacademy; and the Life1881 project in Wales where everyone in a small town is becoming digitally literate)

6. Importance of Physical Space: Somewhere along the way, we seemed to enter into a tacit understanding that online teaching and learning was the same as in-person teaching and learning. We predict that there will be a broad-scale refocusing on the notion that physical community is the secret to unlocking successful learning over a distance. Whether we like it or not, non-education brands such as Starbucks and McDonald’s have ubiquitous global physical space and are well-positioned to become huge players in the education space.

7. Cross-Area Influence: K-12 being influenced by post-secondary and post-secondary influenced by innovations outside education in terms of time + people + space + place. (e.g. The development of all-through academies and learning campuses such as Wood View Learning Community in Plymouth) The opportunity for students to reach ahead and earn university credit while in K-12 will grow. The International Baccalaureate, Advanced Placement exams are precursors to these changes. The Stanford Online High School and Johns Hopkins Center for Talented Youth portend the growing influence of traditional postsecondary institutions in K-12.

8. The Market Optimization of Everything: The future of micro-transactions in education where communication and real time services are in teacher’s control. (Example: Breather, where you can have a classroom on demand or Classdojo where data and rewards on pupil behaviour is transmitted simultaneously to pupils, administrators and parents)

9. Open + Data: Open + data will equal more than just open data! The use of high powered data sets to radically change and inform practice. (example: The Pupil Data Appathon in London and the Office of EdTech’s Datapolooza programme in the US)

10. Hacking Education. While the hacking term is remarkably overused, it’s the best way to describe the emergence of radically different school and college university models that transform each education sector. Thiel Fellow Dale Stephens’ UnCollege, Tinkering School, and the stealth Future Design School are all excellent examples of how education is being transformed.

Dr. James Colliander is the founder and CEO of Crowdmark and a professor of mathematics at The University of Toronto. Ian Fordham is the Director of the Edtech Incubator in London. Aron Solomon is a serial entrepreneur who is a Senior Advisor at MaRS in Toronto.

Raw Signal Group explains what tech managers are waiting for

There’s a lot going on in the world right now. So why does seem like people are frozen in place? Everyone is just waiting….