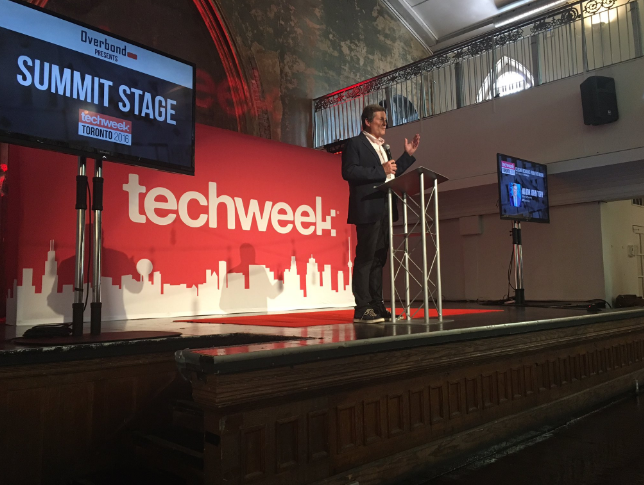 In its first edition outside of the U.S., Techweek — a week-long technology festival — touched down in Toronto with the goal of providing an all-encompassing look at Toronto’s tech ecosystem.

“You have this amazing city which is one of the largest in North America, and also one of the largest tech hubs in North America,” said Amanda Signorelli, CEO of Techweek. She said that while there were very obvious developed sectors like FinTech and wearables that received a lot of attention from events, there was no event that brought together different sectors into one. “We wanted to provide a horizontal layer to start connecting people, and also turn around those stories and sharing it with other markets. This is an example of one of the markets people don’t pay attention to because it’s not Silicon Valley.”

Techweek worked to have events that would have something for everyone, including talks on blockchain and FinTech, IoT, and panels on the general landscape of Toronto and Kitchener-Waterloo’s startup scene.

Techweek included its own pitch competition, which saw 30 startups pitching for a chance to participate in Techweek’s Launch Champion and compete for $50,000. Five finalists — including SkyPrep, Plum.io, TranQool, Hearshot, and PitStop were eventually judged by INCubes founder Ben Zlotnick, Extreme Venture Partners managing Partner Sunil Sharma, and OMERS Ventures analyst Qasim Mohammad. While TranQool took the runner-up prize, PitStop — an IoT platform that can predict vehicle failures before they happen, and an Extreme Venture Partners company — took the top prize.

“One of the old mottos of knowledge workers of Waterloo’s tech community was, ‘let’s build Waterloo as the second best place in the world to build a company,’. I think what’s changing now is that we’re not just the second best America,” said Ali Ansaria, Tulip Retail CEO, on a panel about Kitchener-Waterloo’s tech scene. “To hire people here, you have to tell a story that’s bigger than, ‘we’re gonna make the most money’. The story that really appeals to our community is that we really care about creating great technology because we are passionate about building. If you can tell that story, great engineers love that.”

And with a strong community of hardware builders thanks to the presence of companies like BlackBerry, Toronto’s hardware community received a lot of representation. “There’s great talent on the server and hardware side, and there’s a much more cohesive ecosystem than there was even seven years ago,” said ecobee founder Stuart Lombard. ecobee, which is based in Toronto, creates smart thermostats that are currently the second-best selling in the U.S. He mentions that they’re growing “more than 100 percent” a year.

“The technology has gotten better, and consumer awareness has grown significantly. When we started, no one was talking about smartphones,” Lombard said.

After four days, the week finished off with a speech from Toronto mayor John Tory, known as a longstanding champion of the city’s tech community. “The economic well being of the city is focused on this sector,” said Tory. “At the same time, I think tech is important for reaching our social and non-economic goals. In order to get the social justice we seek, we need the prosperity to pay for it. You can’t tax a dollar you don’t earn.”

For those that missed Techweek, the organization has a mandate to organize annually for at least five years once they launch in a city. “We want to be very forward on focusing on ecosystem as it grows,” said Signorelli. “We’re securing research partners to be able to track growth. We want to say that by the time we close out a five-year tenure, we can point to a company that maybe started small and it became a billion dollar company, and it exited and created angel investors.”