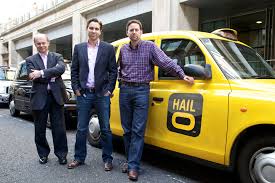 On the same week that Uber Montreal is offering three free taxi rides under $20 to anyone who downloads the app, its main competitor is announcing its arrival, in the New York and London-headquartered Hailo.

Hailo called itself “the Taxi Magnet,” and is a free smartphone app which puts people two taps away from a licensed taxi, while enabling cabbies get more passengers when they want them. A “Hailo hail” is accepted around the world every four seconds from Hailo’s global network of tens of thousands of drivers and hundreds of thousands of passengers.

Along with its launch in Montreal today, the free iOS app was also updated today to reflect the new Montreal changes. “Hailo delivers a game-changing taxi experience for both taxi drivers and passengers. Our launch here will improve the way Montrealers get around by combining world-class technology and customer service.” said Hailo Montreal’s Jeff Desruisseaux. “All around the globe we’re seeing mobile technology drive incredible improvements in public transportation. At Hailo, we’re proud to offer solutions for an industry that is so fundamental to the future of urban mobility in Montreal.”

The service was founded in 2011 by three London taxi drivers and three internet entrepreneurs, and has “rapidly brought the traditional taxi industry into the 21st century by ensuring that passengers are never more than two taps away from a licensed taxi.”

Montreal joins 13 other cities in North America, Europe and Asia where Hailo is prevalent. Over 1.4 million people around the world have downloaded the app.

Hailo passengers can watch as their taxi arrives in real-time and the app’s secure payment system offers a ‘cashless’ taxi experience, where and receipts are emailed instantly. Hailo said in a release that for Montreal’s taxi drivers, the Taxi Bureau-approved Hailo app “delivers GPS technology to allow them to ‘see through walls’ and be matched to nearby jobs, meaning they can earn their living faster and waste far less fuel travelling empty.”

On May 2, young Canadian entrepreneurs once again have the chance to apply for The Next Big Thing, a fellowship program spearheaded by serial…