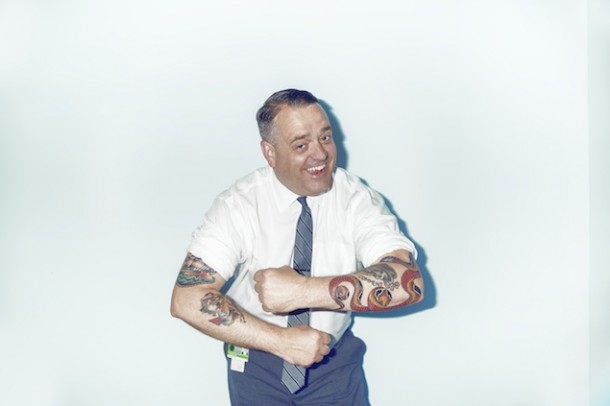 I don’t think a single feature has impacted my urban life more than the ability to anticipate when the next streetcar or bus is set to arrive.

Canada’s winters are cold, often brutally so, and the Toronto Transit Commission — TTC, to those who live here — is well known for misbehaving when the thermometer dips. The ability to open an app — in my case, Transit App, but there are dozens of free and paid alternatives — to see how long I must wait for that metal stallion is a non-trivial life changer.

Brad Ross, the TTC’s head of communication, knows this feeling well. He has lived through the proliferation of smartphones, the immediacy and ubiquity of which has impacted his job immeasurably. I spoke to him on the eve of Dx3, Canada’s biggest digital media conference, where he is set to give a talk about responsive social ecosystems.

“People are just generally mobile these days,” referring to the devices themselves and the changes they have wrought. “They expect immediate information about the service,” he says, highlighting the network of social media responders he set up years ago to cover incoming service concerns, complaints and compliments.

“We have over 100,000 followers on the @TTCNotices account, and another 16,000 on @TTCHelps,” he continues, promising that he tries to read every incoming Tweet addressed to his personal profile. While TTC has a big Facebook presence, it is Twitter where the Commission’s followers feel closest to its employees. “Social media has changed how we communicate from a customer service perspective, and how we communicate with the public.”

Ross and TTC CEO, Andy Byford, are often seen with camera crews around the subway’s 73 stations filming explainers or PSA’s, often to preemptively address rider concerns, such as service disruptions, before they begin.

But whereas the TTC’s social media participation is almost entirely human, much of its mobile hegemony comes from an Open Data Stream API that allows developers to plug into a vast network of vehicle GPS coordinates and service disruption announcements.

“We’re not developers,” Ross says. “We don’t care if it makes money or not — it’s a public good — we’d just like to make [the information] available for free for others to make it better.”

Overseen by NextBus, a subsidiary of American defense and transportation provider, Cubic CTS, the TTC’s complex web of bus, streetcar and train schedules allows popular apps like Transit App, RocketMan and Moovit to convey schedules and services disruptions in real time. It also allows those products to provide accurate navigation directions, an essential tool for locals and tourists alike.

While elements of the TTC’s infrastructure are growing more digital-friendly every year, the lack of a dynamic payment system has stymied innovation within the ecosystem. The Commission plans to outfit PRESTO terminals in many of its stations, buses and streetcars by the end of this year, but calls for a mobile payment solution have been ignored.

This summer, however, the TTC plans to launch in pilot a Mobile Family Pass, which will be issued as an application for iOS or Android. Families of up to two adults and four children will be able to show a proof of payment — a barcode or something similar, says Ross, who admits the details aren’t final — to a driver to gain entry. “We wanted to make things a little easier for families,” says Ross, aware that much of the system is still inaccessible to strollers.

And with the Pan Am Games less than four months away, Ross is ensuring that all systems of communication, from social to email alerts, are accessible to as many riders as possible. The TTC, with the help of BAI Canada, is nearing completion of providing free WiFi access to riders in the so-called “Lower U,” stations that comprise Toronto’s core, from St. George to Bloor/Yonge. Launched in 2013, the TConnect system is currently operational in 18 stations, with expansion to 65 by the end of 2017.

Disclosure: This interview was performed as part of a media partnership with Dx3 Canada, a digital media conference taking place on March 11-12 at the Metro Toronto Convention Centre, where Brad Ross will be speaking. Neither Dx3 nor the interviewee had any editorial control over the content. Image credit: FSLocal