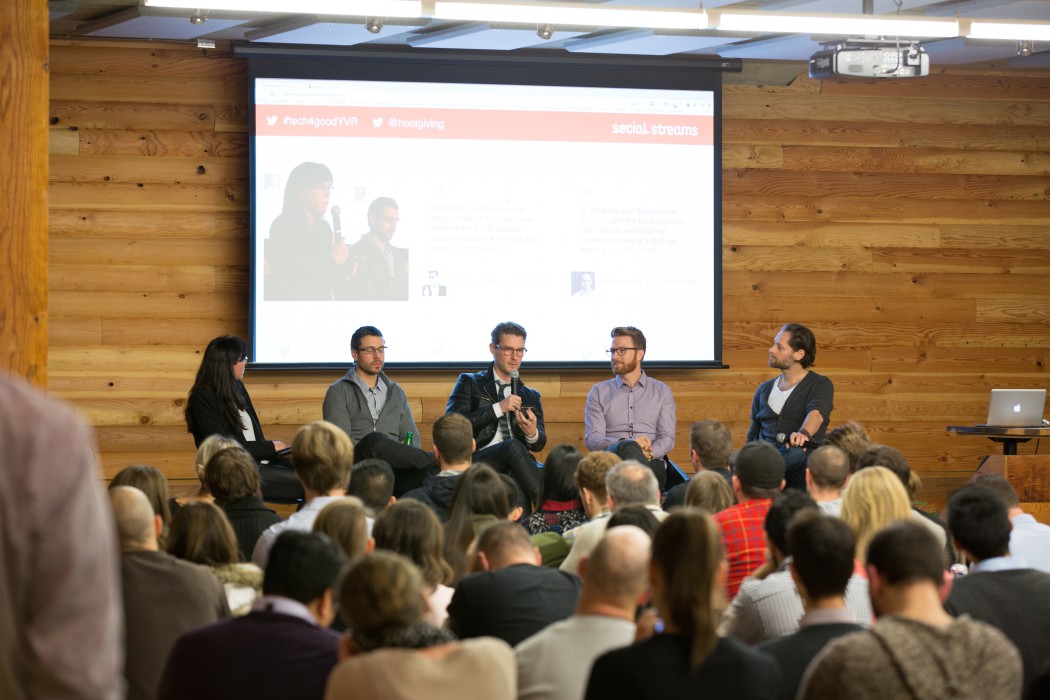 “I hope we shall crush in its birth the aristocracy of our monied corporations which dare already to challenge our government to trial by strength, and bid defiance to the laws of our country” – Thomas Jefferson.

Culture doesn’t manifest in an instant, nor is it simply defined. Culture is an articulated experience. It’s a vision of the individual cloaked within communal contextualization. In the context of Vancouver’s technology community it’s fair to ask how its culture is impacting the culture of our city today, and will do so tomorrow.

The evening was framed around sparking a conversation for us to identify with the gentrification related tensions boiling up in San Francisco. Well-paid tech workers are squeezing and skewing the notion of affordable housing. Longtime local residents are being displaced. There are transportation issues. There are social mobility issues. Highly visible symbols such as the Google buses are now targets of protest.

For some, gentrification is a blight. It’s easy fodder for those shining the light on the darkening and dangerous spectre of our widening social discrepancies to decry. There’s no turning a blind eye, or deaf ear on Vancouver’s affordable housing challenges. The Downtown Eastside is seeing the spread of trendy new condos, restaurants, and shops – much to the ire of some low-income residents, and social activists. While fingers aren’t pointed at Vancouver’s emerging tech scene, it will take leadership by example to ensure we create a culture of inclusion over displacement.

It’s an unfair and overreaching generalization suggesting that the San Francisco tech community bears the full burden for their trend, but they can not abdicate social responsibility either. What’s happening only two hours flying time south of Vancouver serves as a strong cautionary tale for all. Holmes has already lent voice to this topic in a Financial Post article (August 2014) “Could San Francisco-style culture wars come to Canada?” For instance, part of this issue is that the competition for talented people is widening the income gap.

Holmes began by asking the panel “why do you each think giving is important in your organizations?” Giving is one element of defining cultural spirit which could help us avoid gentrification related social maladies. Unfortunately, too much time was spent talking about giving, rather than focusing on a dialogue around what the night was billed as.

The panel participants are passionate and committed to the issues, and undeniably quotable. It was easy filling the Twitter stream with nuggets like:

Missing in the conversation were the voices being directly impacted by these issues.

Conversation is good. Bringing together a diverse audience from the local tech and sustainability community is good. Missing in the conversation were the voices being directly impacted by these issues. If we are going to consider human-centric design solutions to significant social issues, then good intent must meet these problems on the street, and in the flesh.

Adding the promotion #Tech4GoodYVR into the evening mix was admirable but convoluted the question at hand. That said, helping bridge the digital divide is one place where the tech community has to lead.

The #Tech4GoodYVR is offering the chance for individuals to spend one-on-one time with some of Vancouver’s tech leaders. Proceeds from the winning bids will go to The Next Big Thing to run code camps for kids that attend school in the Downtown Eastside. All money raised will go toward supporting these full-day educational camps, and helping ensure kids and teens from all backgrounds have free access to coding skills and resources. The auction runs until Dec 16.

It’s important asking how are we going to reap the rewards of a booming tech scene while avoiding what is plaguing San Francisco. 140 character sound-bites are not enough to strengthen a community culture. Building a culture of empathy combined with actionable intentions ensures our words won’t merely whither into the ether of nothingness.