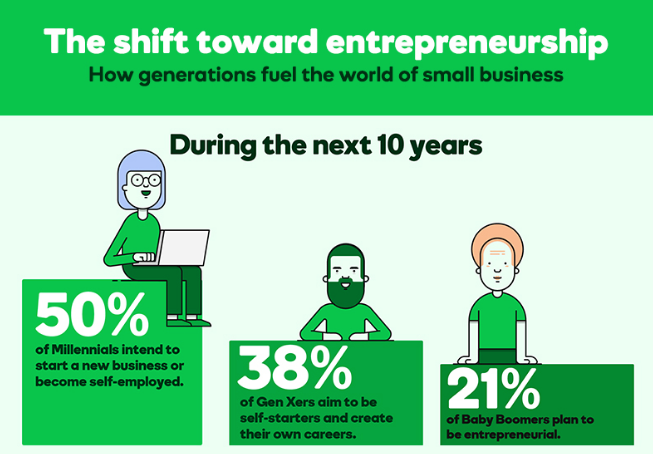 A recently conducted a global survey by GoDaddy has found that millennials and baby boomers are increasingly looking to become entrepreneurs.

Twenty-one percent of small business owners in Canada said they started their business after losing their job.

“Right here in Canada, not only are we entering an entrepreneurial era, but we’re seeing an emergence of micro businesses and a trend toward favouring local, small businesses,” said Jill Schoolenberg, GoDaddy Canada’s vice president. “Seventy-nine percent of Canadians surveyed value microbusinesses with 25 or less employees, which is much higher than the rest of the world, where only 57 percent think a business with 25 or less employees is ideal.”

While technology is a driving force for Canadians to start their own businesses and become self-employed, the survey also suggested that some Canadians want to choose self-employment due to the pressure that comes with new technology, with the loss of jobs has been a contributing factor leading some workers to start small businesses. Twenty-one percent of small business owners in Canada said they started their business after losing their job, and 30 percent said that new technologies have resulted in fewer work hours for them over the last 3 to 5 years.

In addition to technology, GoDaddy’s survey found that autonomy can influence people’s ambitions to become entrepreneurs as people want to work according to their own schedule and their preferred locations. The survey found that 54 percent of Canadians emphasized flexibility as an important factor in one’s work life.

Taking a global look at millennials and baby boomers, the survey found that 50 percent of millennials indicated that they intend to start a new business or become self-employed and 21 percent of baby boomers intend on starting their own venture within the next decade. Within Canada, aspiring entrepreneurs showed a fearless attitude towards self-employment, as 50 percent of Canadian entrepreneurs said they would try again if their current ventures didn’t succeed.

Overall, GoDaddy’s global research suggested that the world’s oldest and youngest generations of workers are looking to take initiative and control of their destiny’s by diving into entrepreneurial opportunity.

The global survey was conducted from August 11 to August 21, 2016. The full survey can be downloaded here.

#Dx32016: How Kik will use chat bots to sell products to teens (and everyone else)

First it was desktop, then mobile, and now, according to Paul Gray, Waterloo-based Kik’s director of platform services, chat app bots are the future…