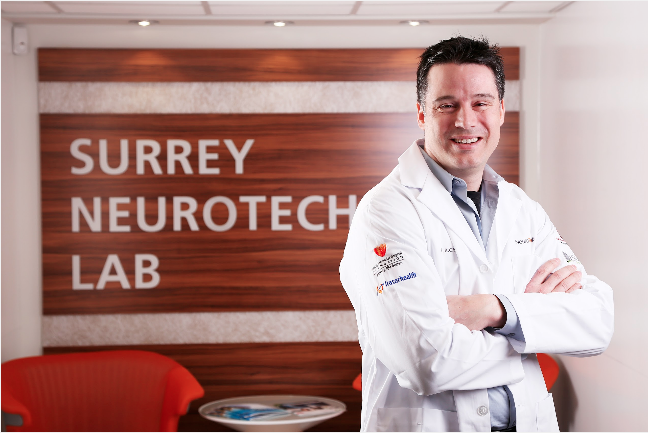 It’s been barely a year since it’s launch and Ryan D’Arcy said “it’s been moving like a bullet train: a lot has happened, and there’s a lot of progress.” D’Arcy is SFU’s BC Leadership Chair in Multimodal Technology for Healthcare Innovation, and is referring to the fact that Surrey BC’s Innovation Boulevard is being primed to emerge as a world class digital healthcare technology cluster.

D’Arcy caught the science innovation bug early in his career.

Having the chance to come home with his innovation and collaboration playbook that proved successful in Halifax, he didn’t hide his bullishness on the future of Surrey. He envisions a massive opportunity in front of the Innovation Boulevard.

“One of the rapid ways you can affect health from both an improved care perspective and an economic development one is rooted in technology,” he said. “Engineering, science and the development of new technologies can be fast acting and have impactful meaning for health.”

“The raw ingredients are all here.” He pointed out  “We have the strength of SFU’s Applied Sciences program, Fraser Health corporate head office (the health region serves more than 1.6 million people, and has $2.9 billion annual operating budget – 2010/11) Surrey Memorial hospital (home to B.C.’s busiest emergency room and a $512-million expansion), the City of Surrey itself (2nd largest city in BC and the 12th largest city in Canada with a population of over 468,000). Along with access to some still affordable real estate, the overall formula is here to attract the right people, the right teams, with the right ideas to build a world class health technology cluster.”

There’s an estimated 180 health-related businesses already located in the area. As well, further driving innovation is the addition of SFU Surrey and the city expanding their high-speed Canarie fibre-optic network. All of this is essentially located within one square mile, as D’Arcy characterized the walk down King George Highway “as the spinal cord of the Innovation Boulevard.”

Maryam Sadeghi is the CEO of MetaOptima Solutions, and the science and technology adviser for the Digital Health Hub. She shared how it was question about the future licensing of her technology that lead to a conversation with D’Arcy. With a telemedicine solution for the prevention and detection of skin cancer, she was trying to understand the potential of working with Surrey Memorial Hospital or Fraser Health.

She candidly suggested that “It didn’t take much conversation before D’Arcy opened up the door to this research lab, with a bunch of computers and said ‘this is all yours’. Bring MoleScope, bring your experience, and bring the vision of creating more companies like yours at SFU.”

“A lot of startup companies who have great ideas are challenged to test things in a real environment. It’ crucial getting the necessary feedback to improve on what they’re trying to eventually commercialize,” she pointed out. “It’s a real strategic benefit to be here, having access to the university resources, grants, funding, Fraser Health and Surrey Memorial. It’s going to be very attractive for companies to come here, we’ll be like a Silicon Valley for Health Care in Canada.”

From D’Arcy’s perspective, “it’s an unprecedented example of partnership in BC’s history. Historically the province has under-performed in its ability to connect and partner in order to compete in the global race, and to some degree we’ve shortchanged ourselves.”

By unprecedented partnership, he pointed to four universities and others incoming, as well as health authorities and businesses generating an excitement around working together. D’Arcy credits much of this to the role that the City of Surrey is playing, saying “the city is like Switzerland in it’s neutrality by allowing everyone to come in to be part of this.”

For the healthcare technology community this partnership is also allowing for the launch of Health Tech Connex. D’Arcy isn’t characterizing this as an incubator or accelerator. He says “it’s first and foremost about location, location, location. Proximity to the healthcare professionals is vital. It’s all about facilitating access to the right people, and helping companies from early stage university spinouts to multinationals to move their commercialization efforts along much faster.”

Entrepreneurs will also be able to count on the support and services of the BCTIA and Life Sciences BC through their roles as founding partners. There are currently about 30 companies in the screening process, and asking for access to the hospital, pilot projects, clinical trials, or university resources. Demand to join is growing at a pace D’Arcy didn’t imagine even in his most optimistic moments.

Sadeghi is so convinced of the potential for this digital health hub and the Innovation Blvd concept, since August 1st 2013 she’s essentially been mentored full time. She plans to join the SFU research team shortly, but said it was question about the future licensing of her technology that lead to a conversation with Ryan D’Arcy: “it’s all about helping realize this vision.”

It takes more than buildings, pavement and technology to create a winning business cluster. With D’Arcy driving the vision and acting like the connective tissue, Innovation Boulevard stands to be a difference making destination.

Former GrowLab startup Retsly has been acquired. Zillow, Inc, the Seattle-based real estate and home-related marketplace, today announced  it has acquired Vancouver, BC -based Retsly, a software…