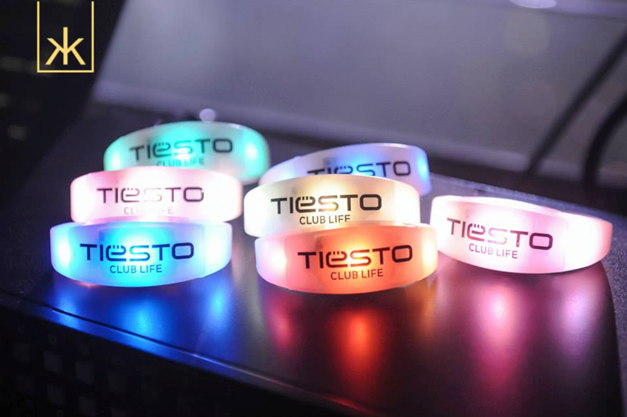 Now this is pretty cool:

The same Montreal startup that was responsible for 80,000 SuperBowl fans connecting into the First Human Video Screen at the Halftime Show is up to its next challenge: Tiësto.

Now PixMob will team up with the famous DJ to “redefine club life”, as part of Tiësto’s residency at Hakkasan Las Vegas beginning tomorrow night and for the remainder of his shows there in 2014.

PixMob’s technology uses infrared to send instructions wirelessly to pixels worn by audience members, creating colourful light effects across a crowd. PixMob VIDEO, the newest adaptation, allows show producers to create live video effects using the audience as a canvas. It allows for real-time transmission of colour information onto any number of mobile pixels at hundreds of thousands of individual locations up to 300 meters away, without the need for geo-location.

2,500 Tiësto fans will be wearing LED wristbands generating wireless video effects in sync with his music. “Pulsating with light as one organism, the crowd will become a canvas for Tiësto’s visuals, creating an immersive experience seen only at the Superbowl,” wrote the company.

‘The main idea behind PixMob VIDEO is to offload the geo-location onto the video transmitter to keep the pixels simple and reactive’, said cofounder Vincent Leclerc. ‘We’ve worked many years to create and fine-tune a PixMob transmitter that in essence is very similar to a traditional digital video projector. Our projector beams digital information over infrared onto people, instead of visible colors onto a white canvas.”

PixMob VIDEO is controllable via computer, where a video server sends a video feed to transmitters, which then send real-time instructions to pixels at over 100,000 locations over wireless infrared. The pixels then change colour according to the information received, allowing the lighting director to include the crowd in a creative vision.

The idea was created in 2006 when CEO David Parent spent a week crashing with Leclerc at MIT. The company was the result of “a desire to create interactive experiences with the ability to change human perception.” Connecting crowds to create unique events, the company also helped create the Arcade Fire balloon drop at Coachella 2011, the Cirque du Soleil Microsoft Kinect launch, the Eurovision Song Contest and the Super Bowl Halftime Show.

Leclerc holds a Masters in Media Technologies from the legendary M.I.T. Media Lab, while Parent’s first company, TDS Network, developed electronic displays for public spaces. He sold it in 2003 and founded ESKI, which became PixMob in 2014. Parent was also named 2012’s Entrepreneur of the Year by the Youth Chamber of Commerce before heading off to MIT for an executive education program.