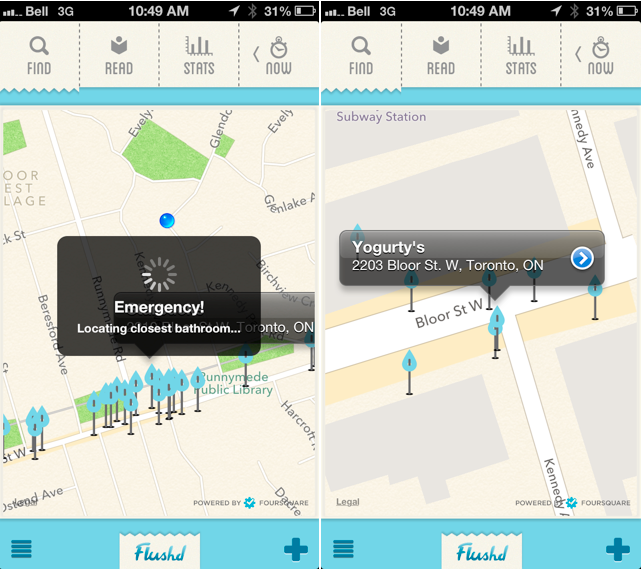 George Costanza would love this app.

Earlier this week Vancouver and California-based startup Flushd launched on iOS, an app that helps people find the nearest washroom “in a pinch”.

With the app, Jerry Seinfeld’s main accomplice would never have had to have his own personal bathroom while working for the New York Yankees. Maybe he wouldn’t have had to memorize the locations of all of New York’s finest public toilets either.

Flushd is the “world’s best bathroom app at your fingertips,” helping users find a suitable public (or private) washroom by location or quality rating. Bathroom profiles include user ratings and information such as whether toilets include changing tables, have bathroom attendants and other key features. In emergencies, users can hit the “Flushd button” and get mapped immediately to the closest point of relief.

Finally, bathroom goers can take advantage of a badge system, whereby if they check in a few times at the same Boston Pizza washroom, for example, they could earn rewards, like five percent off their next meal.

Flushd CTO Steven Rogalsky (his position pronounced “Coliform Monetization Officer” on the site) said that the company is currently working on a few big partnerships. Whether a chain restaurant in a busy city can be convinced to actively invite people to use their washrooms without immediately spending money is unknown. But the four cofounders at Flushd are all hoping those restaurants will see the value in mobile while on the toilet.

“85 percent of people take their smartphone to the toilet and nobody has looked at that space and either tried to monetize that or provide a value for that time,” said Rogalski. “We can help them find toilets and once they’re on the toilet we can start monetizing the attention and the time that people have on the toilet.”

Again, how well the idea can be monetized remains to be seen, but Flushd is certainly on to something. Popular NHL hockey player Paul Bissonnette has even coined the term “twooping” for his over 450,000 followers on twitter, to denote the act of releasing excrement while being active on the social media tool.

Considering how many people not only “twoop” but simply check their smartphones while on the toilet, one might assume that there’s valuable time there to be monetized. Rogalsky mentioned that advertising revenue could turn out to be a valuable, especially if publications or brands wish to add their content on the bathroom reader aggregator, where a user’s twitter feeds and New York Times articles will be displayed at any time.

The project is self-funded, and since launching a few days ago Rogalsky said the app has received a “tremendous amount of downloads.” Even the Flushd blog should provide some insightful reading too: cofounder Jessica Edwards is a gynaecologist while another cofounder, Marc Richmond, is a urologist.

So which public toilet does the expert Rogalsky prefer? Before trying to ease of the question I finally got him to answer. “My favourite place to go right now is a really nice, quiet spot on the top floor of the Hudson’s Bay in Calgary.” A modern-day Costanza?