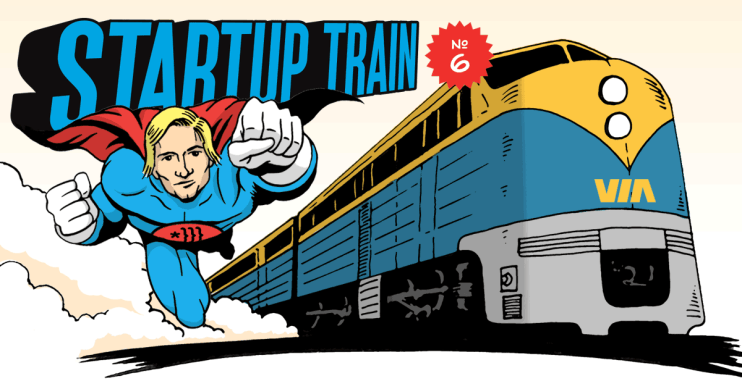 Startup Train is back for the sixth year in a row to connect the startup community on the way to Montreal’s Startupfest from Toronto between July 12 to 15.

The Startup Train, led by Guelph-based Band of Coders, invites a group of Startupfest attendees on a first-class train car to network before the event starts. The five-hour train ride — which will include founders and investors — will include mimosas and one-on-one speed-dating mentors.

“This is a great opportunity for a founder who’s looking to network with other startups and seek out mentorship. You’re literally ‘locked’ in a train car for five hours, with some pretty awesome people,” said Phil Everson, president of The Entrepreneurship Society at University of Waterloo. “The festival itself can also serve as a great way to ramp people up on the basics of starting and growing a company. It’s basically a conference, in tents.”

The Startup Train has been host to some big winners at Startupfest; in 2014, after Shopify sponsored two tickets, Susie Pan, former CMO at Blynk, was among one of the recipients. After pitching on stage, Blynk received the $100,000 Investment Prize at Startupfest. Redtree Robotics, who was on the Startup Train in 2014, pitched to FounderFuel and received a $100,000 investment.

“When we pull in at Montreal’s Central Station faster than a speeding bullet, we will unload an incredible group of well-prepared startup superheroes, ready to get the most out of Startupfest! Focused, fearless, and ready to fight crime! Okay, maybe not the fight crime part,” said Startup Train founder Brydon Gilliss.

Tickets are on sale here, and include a one-way Startup train ride and Startupfest ticket. This year, Startupfest will be leaving a day earlier on July 11th to accommodate those attending Premium Fest.

As Peter Parker (Spiderman) discovers his newfound powers, his uncle, Ben reminds him “with great power comes great responsibility.” With all eyes on the…