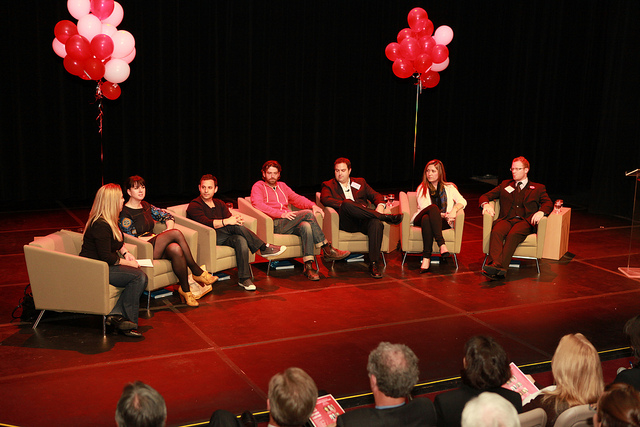 When it launched, I too was critical, questioning the aim of such a campaign in a few articles I wrote while reporting for Techvibes.

But Startup Canada’s Noah Redler said that last year’s well-publicized launch, and a relatively quiet period in between, was just the beginning. While it’s true that the initiative doesn’t always make noise, said Redler, “we’re always out there.”

To Startup Canada’s credit, it is still standing and evidently it isn’t going anywhere. I asked Redler if it resembles a locomotive, taking a while to get chugging. Once it gets going, will it be a strong and steady force in Canada’s entrepreneurial community?

“The launch was only the beginning – we consider our organization a startup in itself, we’re still all volunteers and that comes with its own challenges, but we have never given up and that is why we will be successful in the long-term,” Redler told BetaKit. “I would equate StartUp Canada’s launch to that of a startup that just unveiled the new beta version of their app – we may be live, but we need to undertake the process of increasing our awareness and proving our value to the community.”

He pointed to several quietly successful initiatives already that has had a positive impact on communities. They’ve built ecosystems that were either struggling, or never existed, in St-John’s, Kingston, Lethbridge, Winnipeg and more. Meanwhile its PIVOT Magazine is live, while bi-weekly StartUp Chats on Twitter and Google Hangouts with industry experts are providing value in small chunks. Redler said the campaign has even successfully engaged politicians, and will be hosting our first “StartUp Canada Day On The Hill“, featuring face-to-face meetings with political figures and business leaders to discuss what can be done to support entrepreneurs at the governmental level.

Now it’s ready for the official launch in Montreal, coupled with an event called “MashUp Entrepreneurial MTL” on October 24.

The MashUp seems like a pretty cool idea: three industry leaders in Canadian Tire, Cromwell Management and another company (yet to be confirmed) will detail an aspect of their business that could be improved, possibly from someone else’s technology or idea.

LP Maurice, a part-time angel investor and CEO of Montreal-based startup BusBud and Denis Andlauer, the long time CEO of Orleans Express, will both deliver opening presentations to participants. After that each traditional industry leader will present an aspect of their business that would benefit from innovative tech solutions, and up to seven tech companies will then be given the opportunity to present their business in a two minute sales pitch. The traditional industries leader will pick their favourite sales pitches and offer them the opportunity to make a full presentation at a later date.

“In short, we’re giving you the chance to make a sales pitch to three major potential clients and see if you have what it takes to make the sale,” reads the MashUp site.

While entrepreneurs like Maurice have successfully executed partnerships between new-age web startups and long time industrial mainstays (in BusBud’s case, Orleans Express), Redler said this hasn’t always been easy for startups, hence to motivation for the event.

“StartUp Canada realized that there was a divide between the incredible tech startups emerging in Quebec and many of the long-standing industries that helped build our economy over generations. We want to introduce companies like Canadian Tire and Cromwell Management to the innovative solutions that are available on the market today,” he said. “As entrepreneurs, we tend to focus a lot on pitching to investors, which is an important part of helping startups grow, but this event will focus on always-necessary sales pitches to real potential clients.”

Partnering with Startup Canada for this community event is Nicolas Marceau, Quebec’s Minister of Finance and the Economy, as well as several other institutions, like the Fondation de l’Entrepreneurship, RJCCQ, the Business Development Banks of Canada, Centech, Notman House, International StartUp Festival,  MTL NewTech, and startups like Intuit, Busbud, Comlinker and Publikit.

It may be taking a bit of time, but no one can deny that Startup Canada continues to make a good deal of effort engaging entrepreneurs. It’s entirely volunteer-led and for the new Montreal launch, Redler said it just wants to put on the pom-poms.

“My favorite aspect of StartUp Canada Montreal is that we are not looking to compete with services,” he said. We’re the cheerleaders or as I often say, the Switzerland of the startup community. Our goal is to promote entrepreneurship and to try collaborate with the numerous groups already doing amazing work on the ground so that we can expand the community.”