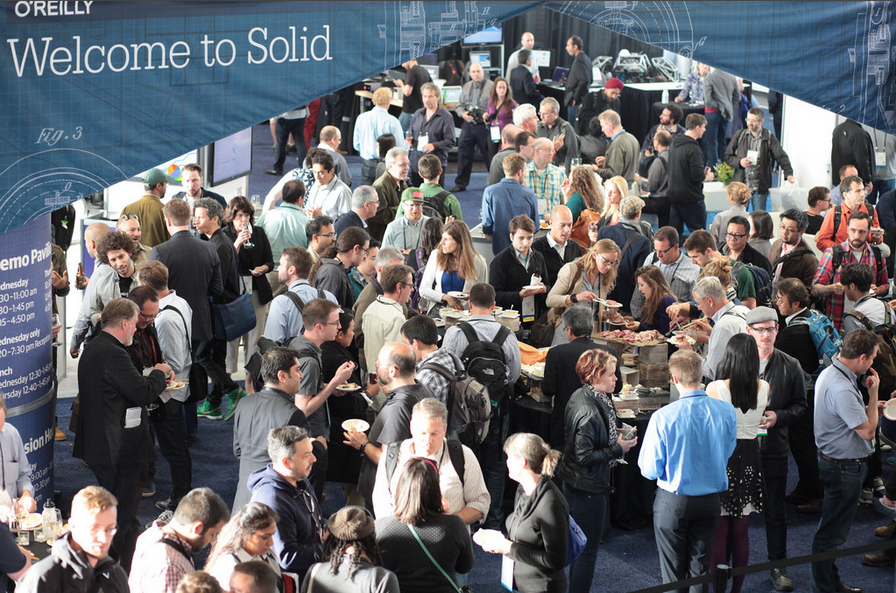 There’s life events where you never forget where you were, or what you were doing. I was almost 7 years old when Neil Armstrong uttered the most famous line – “That’s one small step for man, one giant leap for mankind.” It always stuck with me.

Exploring space has influenced countless communications, hardware, software, and material science innovations. Being the third nation in space, Canada’s history of innovation is a rich one. BetaKit has featured the likes of Dr. Alan Winter for his early work in satellite technology, Commander Chris Hadfield for his leadership aboard the International Space Station, and the recent efforts of Vancouver’s UrtheCast to deliver us a 24/7 High Definition view of earth from space.

It’s the fascination of meaningful science behind space exploration that had me excited to learn more about the SPHERES program and Project Tango at O’Reilly Media’s first ever Solid Conference. Over 1400 people attended two days of talks and demos. The event was an enthusiastic exchange of ideas about the present and future for the Internet of Things, as well as the coming together of our digital and physical spaces.

Seeing the partnership between NASA and Google first hand was a highlight. NASA says the project “aims to develop zero-gravity autonomous platforms that could act as robotic assistants for astronauts or perform maintenance activities independently on station. The 3D-tracking and mapping capabilities of Project Tango would allow SPHERES to reconstruct a 3D-map of the space station and, for the first time in history, enable autonomous navigation of a floating robotic platform 230 miles above the surface of the earth.”

NASA’s Zachary Moratto (Engineer at SGT / NASA Ames Research Center), shared more insight about the project, saying “it’s technology that can navigate. It’s a GPS-like system, but better that GPS because it works indoors, works without GPS. It knows how high you are up, and even knows what angle you’re pointing at in any given moment of time which allows you to do some pretty crazy things.”

He couldn’t speak to Google’s intentions or future commercialization ideas, but talking from NASA’s perspective “this is perfect for a robot, it’s a satellite that wants to know where it is in the environment.”

The goal this Summer is proving it can navigate throughout the space station. Looking into the future Moratto suggested “we’d like to integrate Tango-like algorithms, software and hardware into Sphere as into one giant robot, and eventually become the “Roomba” of the Space Station. We want a robot that can navigate, do patterns, figure out where it is, and to have expansion ports for attaching other instruments. We want to be the platform and not the end device.”

Use cases include the potential for connecting an air quality measurement sensor. Moratto added “there’s no convection in space, so CO2 pools up and can be a deadly blob of air that an astronaut could fly into. It’s one less thing for the astronauts to check and monitor themselves.”

He also mentioned that it could be a telepresence robot allowing mission controllers, to see over a shoulder. “Right now the astronaut spends up to 30 minutes preparing cameras to record a given operation.”

“The Space Station becomes kind of like a giant dormitory too. People bring stuff and the place gets kind of messy,” he noted. Finding tools and equipment can be challenging at times, and with Tango’s mapping abilities it could helpful for finding assets tags. “It will be great for helping keep track of where stuff is in the space station.”

The “holy grail” would one day be being able to operate outside of the space station.

The NASA and Google teams have only been working together for the past nine months, yet it’s quickly proving to be an important exploration into the potential for today’s state of the art vision technology.

This video is a great look at Spheres and Project Tango coming together.

TextNow continues to grow despite pushback from incumbent wireless carriers