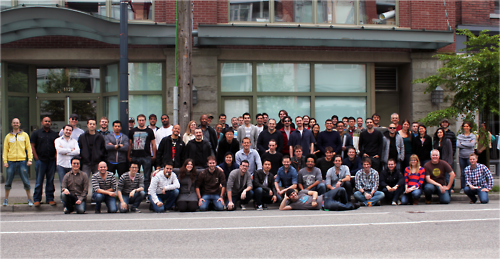 There’s something about Vancouver. We continue to see big-name tech and entertainment companies flock to Canada’s hip pacific city to setup shop.

It might be because of the painful process of getting work visas in the United States, and Canada’s comparably easier climate.

Whatever it is, something’s going on. Today Sony Pictures Imageworks announced that it’s moving its headquarters from Culver City, California to a new state-of-the-art facility in Vancouver, capable of accommodating up to 700 employees.

In 2010, the company opened a production office in Vancouver, housing 80 artists. Last year, during the production of The Amazing Spider-Man 2, Sony Pictures Imageworks staff in Vancouver topped 350 people.

“Vancouver has developed into a world-class center for visual effects and animation production,” said general manager Randy Lake. “It offers an attractive lifestyle for artists in a robust business climate. Expanding our headquarters in Vancouver will allow us to deliver visual effects of the highest caliber and value to our clients.”

Sony Pictures Imageworks’ new 74,000 square foot production headquarters will be located at the Pacific Centre, aCadillac Fairview property, in downtown Vancouver, near many of the city’s most popular restaurants, hotels and cultural attractions, and close access to main railway and rapid transit lines.

Well Health Technologies, a publicly-traded healthtech company headquartered in Vancouver, has acquired the services division of Cycura, a Toronto-based cybersecurity startup, for approximately $2.55…