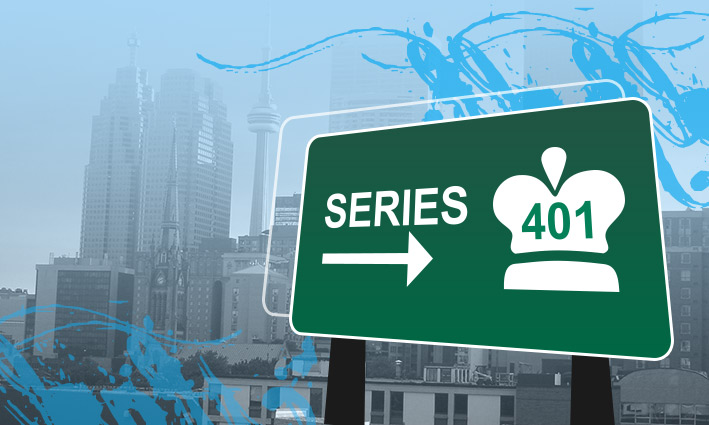 The second annual Series 401 event took place this past week at MaRS. Initially a joint venture between Communitech and OneEleven, the event was designed to create a physical connection between Kitchenter-Waterloo and Toronto, allowing startups from both ecosystems to network with and pitch to investors.

This year, the connection seemed a little stronger, with fifteen startups from Hyperdrive, Velocity, MaRS, OneEleven and HIGHLINE all pitching in one room. The inclusion of the latter accelerator is significant, as its Vancouver connections, along with the influx of investors also in town for CIX, lent Series 401 a broader Canadian atmosphere.

The quality of the startups lived up to the heightened stage. Each of the fifteen startups present were able to demonstrate significant traction – if not generated revenue – and on the whole I was impressed by the presentation quality of each pitch, which was far above that from most events of this kind.

What was pitched at Series 401 was overwhelmingly B2B services, with almost all the startups looking to make small changes to serious businesses for big impact.

Speaking with Steve McCartney, Communitech’s VP of Startup Services, this was by design. Indicating a desire to bring “both cities’ A-Teams,” he told me that while each accelerator was able to submit entrants, the final selection of startups was left to Series 401 to ensure a high degree of quality. The additional scrutiny also allowed the organizers to ensure that the right investors were in the room, both in willingness to spend and knowledge of verticals being pitched.

What was pitched at Series 401 was overwhelmingly B2B services, with almost all the startups looking to make small changes to serious businesses for big impact. The event might have seemed boring to those looking for the next photo-sharing app, but not to those in the business of making money.

Which isn’t to say there weren’t a few breaks in the mould. The event did feature a few hardware-focused startups, including Wattage, which is attempting to democratize the creation of hardware, and Nano Magnetics, which just might change the world by allowing devices to network together via magnets and USB. Speaking to both startups after the event, it was clear that each company was excited to have participated.

“When you start a business and you’ve never gone through the startup ecosystem, you feel like you’re trying to learn the rules of the game and fumble your way through it,” said Wattage founder Jeremy Bell. “For me it was a tremendous opportunity to meet people, network, and connect with the right types of investors as we’re attempting to raise some money.”

Nano Magnetics founder Tim Szeto agreed. “I thought there were some super high calibre people, some super intelligent people here. For us it’s really important, because at the stage we’re at right now, it would be great to have some seed [funding]. We’ve got a lot of institutional interests, but at the same time we want to bridge it with some Canadian money, because we’re a Canadian company, and a lot of the institutional stuff comes outside of Canada.”

When I asked Szeto if he was concerned about being one of the few hardware companies pitching, he shrugged me off. “I think it’s refreshing. But it’s refreshing in a comeback way. Tech started in the hardware space and it went to software.”