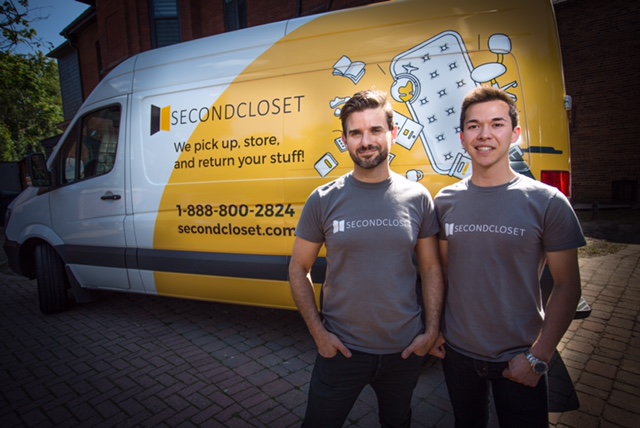 That was partly thanks to BlueCat founder Michael Hyatt, a lead investor along with his brother Richard, who wanted to take a chance on the early-stage business he came across at CDL, where he’s a founding partner. Second Closet co-founder and CEO Mark Ang — who was working at another company as a student — decided to show Hyatt what he was working on on the side and get his thoughts.

“I liked him, and what you do, you bet on the person. And this guy’s got it. And I like the model,” said Hyatt. “It’s a je ne sais quoi, and you realize they’re highly motivated and they remind you of yourself 20 years ago and I just felt, he’s got everything but he’s not supposed to have experience so I can help with that.”

“Most people don’t pile self storage to the brink, they will only use maybe three feet of it off the ground.”
– Mark Ang, CEO and co-founder of Second Closet

Colliers’ International Mike Cowie and AJB Software founder Naresh Bangia also participated in the round. Second Closet, which went to market in April, allows people to store their belongings and pay for the space they’re actually using, rather than paying one large sum for a storage locker that they likely won’t use to full capacity. The company drops off boxes for people to store their items in, then picks up items to be stored in its climate-controlled Mississauga warehouse. Users are charged based on the space the boxes are taking up.

“Condo lockers or storage units get broken quite frequently, but not a lot of it gets reported because it’s a dormant thing, and people can be in and out without you really knowing,” said Ang. “We literally have someone on-site 24/7, our facility is guarded, alarmed, and insured, and you get that for no additional cost. That’s a huge differentiator for people who are storing valuables.”

The company launched with the hypothesis of targeting people with smaller amounts of storage; Ang says they have one client who uses Second Closet to interchange between her summer and winter wardrobe she can’t fit in her small apartment. There’s also an opportunity within the millennial market, who often have very limited space because of difficulty getting into the housing market.

But they’ve also gotten interest from people storing up to $500 worth of items.

“Most people don’t pile self-storage to the brink; they will only use maybe three feet of it off the ground, but there’s still another seven feet that they’re just not using but they’re still paying for,” said Ang. “So we’re actually cheaper for people looking to store 20 to 50 items and we have many clients that are already doing that and then we also have clients on the lower spectrum that are storing only one or two things.”

The company plans to use the funding to scale marketing and operations, as the five-person team currently has 13 trucks operating in the Greater Toronto Area. “It’s hard to keep up with operations because it’s growing so fast. At the same time, we want to invigorate that growth.”

Lead investor Hyatt is optimistic about that goal. “When you invest, you have to imagine you’re married for 10 years, and why would you want to be in a bad relationship for 10 years?” said Hyatt. “I ask [entrepreneurs] to show what the company would be like at $1 million a month. I wouldn’t have invested in Second Closet if I didn’t think it could get to $20 or $30 million.”

Five Atlantic Canada-based tech startups have been selected to receive $25,000 each as part of the Volta Cohort pitch competition held on Wednesday night….