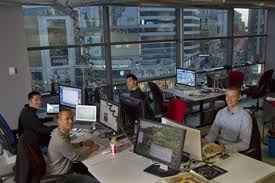 Having launched in 2010, The Digital Media Zone (DMZ) at Ryerson University isn’t the oldest incubation centre for startups in Canada, but 2013 can be seen as a milestone according to the organization. And it’s saying that 2014 will be even better.

The DMZ reported today that last year was its best year, welcoming in 46 startups that attracted $24.5 million in seed funding from a variety of sources. In total since 2010, 123 startups have spent time at the DMZ, creating more than 900 jobs. According to a release, 70 percent of those companies are “still flourishing or have been successfully acquired—results higher than average for startups.”

“We’re very proud of our achievements to date,” said DMZ executive director Valerie Fox. “There’s no one factor that accounts for our startups’ success, but rather a mix of advantages that help companies thrive. These include the best advisors, hosting hundreds of industry and government tours per year, and a strong culture of openness and collaboration among entrepreneurs.”

The DMZ listed several examples of companies that flourished under its leadership in 2013. Among them were:

-Online video interview screening platform Kira Talent, which raised $2 million in capital, led by Relay Ventures. The company has also expanded from two to 16 employees in the past year. Today, Kira talent serves hundreds of clients and is being used in over 80 countries around the world.

-Komodo OpenLab, developers of inclusive technologies for those with disabilities, raised several hundred thousand dollars in 2013. Funding came from a variety of sources including the Federal Economic Development Agency for Southern Ontario Science and Engineers in Business Initiative Fellowship and the Ontario Centres of Excellence Experiential Learning Program.

The organization wrote that in 2014 it will focus its priorities on more “exponential learning, growth and success” for itself and its companies.  “In 2014 we hope to explore more corporate partnerships and relationships with other incubators, more international outreach and collaborating with new Ryerson zones being cultivated in specific areas such as fashion, design fabrication, food and social innovation,” said Fox. “All together this means a richer, more developed entrepreneurial ecosystem that will help create greater economic and social impact for Toronto, Ontario and Canada. This year is going to be a very good year.”

theBoardlist launches in Canada to get more women on company boards

In July 2015, Joyus founder Sukhinder Singh Cassidy launched theBoardlist, a curated platform that includes the names of women from various industries willing to…