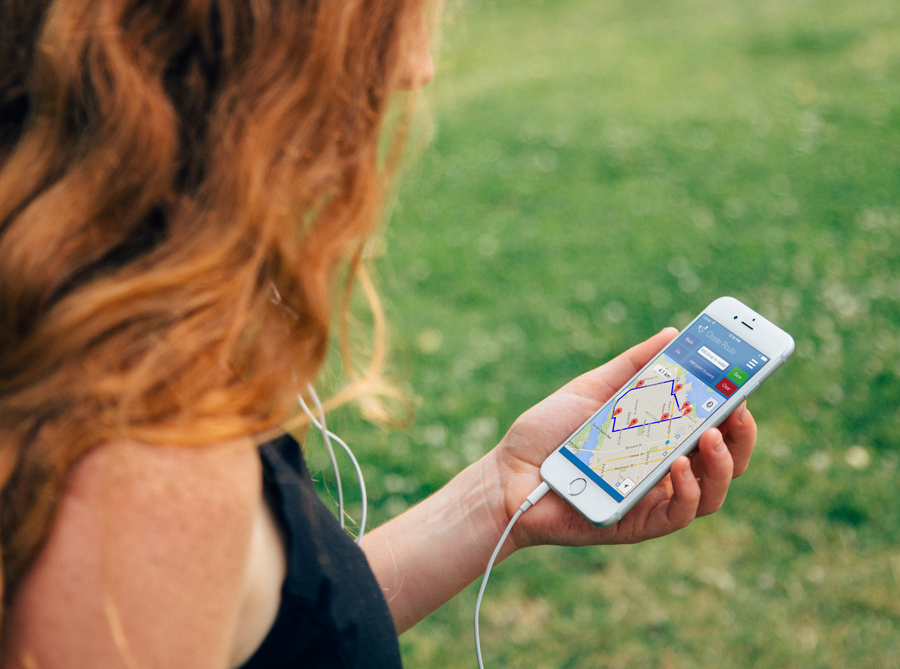 The RunGo app relaunched with a new design in the Apple store last week, as part of a pivot to win over a new market. The Vancouver-based tech venture has targeted the travel and tourism market, aiming to tell tourists where to go if they want to have the run of their lives (without getting lost in the process).

“As a business traveler who was always on the road, it was hard to find great runs,” says RunGo Founder Craig Slagel. “With RunGo on their smartphone, our users can find routes that have already been navigated and approved by the locals, or they can create their own route and use the app’s guided audio along the way.”

The app makes it easy to find a great running route, even if you’re visiting somewhere for the first time. It also tracks distance, pace, calories burned and more – a very useful tool for fitness-conscious travelers who want to keep up their routine on the road.

It’s a marathon, not a sprint

Competing in the tech startup marathon can be as grueling as the real thing. It’s a hard journey that requires mental endurance, instincts to help you adjust your game plan at just the right time, and a strategic willingness to spend energy to leap intimidating hurdles. Slagel knows this better than most, chatting with us in between 100-mile marathon runs that he’s been doing for 15 years straight. “I was working at Electronic Arts and wanted a different kind of challenge – I decided I’d do a marathon. Because of work, I had access to worldwide travel – which is also something that’s inspired the company now. I was always looking for places to run, wherever I was traveling.”

For Slagel, success with a startup comes from consistency – just the same as in running. “Even when you don’t feel like doing it, you need to prepare or you might not finish. That’s not something I realized right away; I’d work extra hard so I could do well on a race day. Then I picked up some better training techniques to improve my consistency and just 5 months later, I was running the London Marathon. Because I’d prepared, I wasn’t in terrible pain that I’d been warned about.”

Slagel took a similar approach to running his startup, preparing by taking a deep look at the marketplace and realizing a whole new niche of apps was opening up. “A game came out called Zombies Run that was wildly successful. I thought, ‘they did that – I could do that!’ How hard could it be?”

Slagel decided his first move was just to create a proof of concept, a platform game called Vancity Dash, for running around the city. This was a test to prepare for the real thing – just to get an idea for the process of app development from the beginning to getting it into the Apple store. “The game turned out to be kind of fun – but also stupid. Playing it didn’t make much sense to me. But once I had done it, I had a better idea of what I needed to do next. We scrapped it so we could move on to something more relevant.”

Knowing when to pivot on the path helps you keep momentum

The next app was about running with friends. “This app would be your motivator, giving you advice and telling you stories along your run,” Slagel said. “It was supposed to be a virtual partner and you would buy your partner running gear from your virtual store. It was an interesting experiment – but it made no money! And then, when iOS 7.0 came out, it just broke.”

Slagel still wanted to run with the running theme – but the path forward wasn’t totally clear. Then the turn came.

“I had a habit of getting lost on runs,” he said. “That’s around the time I came up with the idea of having an app to guide me on runs, the same way that you get with a car navigation app.” In two months, he had a prototype, tested it on a new run – and didn’t get lost. That validated his idea, so he started looking for a team to develop it.

But eight months later, they were at a standstill. “I didn’t think it would be this hard,” Slagel said. “Getting Google-type directions for runners, how hard could it be? That’s when I realized why there are so few navigation apps out there: it’s challenging to build a navigation system, especially for runners! They do shortcuts, change routes mid-run – and how do you handle these situations?”

So the next pivot came. “We realized we were just trying to do Google Maps backwards: they would say, you want to get here? Then follow this path. We were saying, here’s the path – and here’s how you follow it.” Doubt started creeping into the operation – but that was the time to revalidate their original idea, get honest feedback and get user input to find the right way forward.

“We got to the point where we have the technology and have redesigned the app with the user experience in mind,” Slagel said. “We’ve also changed the focus from the individual runner to the tourism marketplace.”

When the Vancouver Marathon came around this year, RunGo thought 50,000 people would hear about the app and download it – but that didn’t happen. “The pain point wasn’t high enough for local runners – because they have a guide, or in a running club, they’ve got a leader. But travelers who are here for a day or a week don’t have that luxury. We partnered with the Fairmont hotel and hotels are a big focus right now. By changing the model, instead of hoping for 5,000 downloads in one day for a big event – and then nothing, we can get 40 or 50 in one day, every day.”

When the marathon becomes a relay race

The founder of any startup ends up filling any number of roles, but successful ventures can’t rely solely on the leader to keep momentum. At some point, you’ve got to hand off the baton and just let your team run with it.

Recently, Slagel saw the opportunity to enter RunGo in a major competition, the Summer of Apps AppCircus happening in San Francisco, covering a Sports and Fitness theme. “There wasn’t a lot of notice, but we got accepted and 10 minutes later, I got an email.”

It was from Jaycee-Ann Day, RunGo’s UI/UX Designer, Web Designer & Developer, asking to go pitch for the company. “I believe in letting people do the work they’re passionate about and Jaycee knows the product as well as anyone in the company,” Slagel said. “It’s great when other members of the team can do the pitches, not just the founder, so I can focus on other aspects of the business. It doesn’t always have to be me.”

Just days later, Day walked into a room where she was expecting 20 people – and it turned out to be 200. “I’d prepared for this pitch over and over, everywhere I could, envisioning it going smoothly, watching countless pitch videos – but for a second, I was incredibly nervous,” Day said. “But Craig reminded me of some advice he’d picked up from the marathon running circuit: to conquer the fear and make it your own. That, and he showed me pictures of puppies. It worked.”

RunGo’s pitch got them to the finalist round out of dozens of competitors, but ultimately, they didn’t win. As with any kind of endurance sport, Jaycee feels she’s learned lessons she can apply to win for RunGo the next time around.

“Once I was up there, I actually enjoyed the adrenaline rush and was able to hit on every point smoothly,” she said. “More importantly, I was able to get feedback from my peers at the competition. We got a lot of support from the San Francisco startup community. It was an amazing opportunity – and it was a great learning experience to be part of this race. Now we’re on to the next one!”