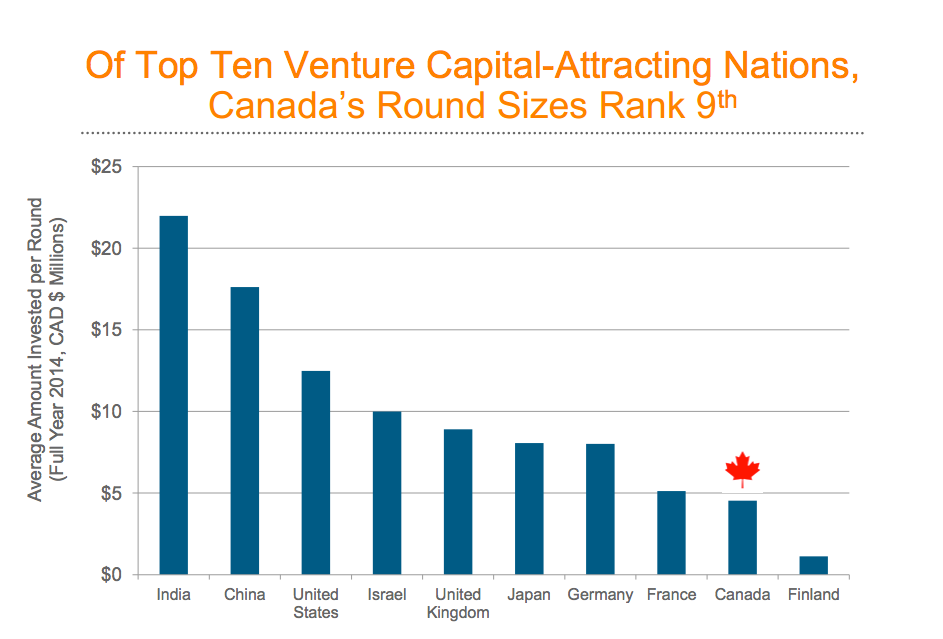 Last week, we covered the CVCA investment in Canada report, which tallied the total number of disclosed venture capital deals in Canada for 2014 at 379, worth $1.9 billion. Today, Thompson Reuters has released its own report, claiming that the total number of VC funding in fact reached over $2.36 billion.

Reuters states that the $2.36 billion amount, a 21% increase from 2013’s reported earnings, came via 522 different rounds of financing, a 12% increase from the previous year. Overall, Reuters estimated 2014 to the best year for VC funding in Canada since 2002.

A comparison of Reuters’ VC firm rankings show a higher number of deals for firms like Yaletown and iNovia Capital compared to the CVCA’s, which may account for some of the discrepancy (see slides below). Interestingly, Reuters also tracked a significantly higher number of Canadian private equity deals in 2014 at 410 (the CVCA’s number was 296). The total fund tally, however, was $32.2 billion, well below the CVCA’s $41.2 billion amount.

When reporting on the CVCA’s tally of Canadian VC investment in 2014, we noted that our home country was far below that of VC investment in the United States. Reuters’ report concurs, showing Ontario, Quebec, and BC all slipping in the North American rankings compared to 2013. Reuters, however, did have Canada ninth in VC-attracting nations.

UPDATE (02/11/15): Reuters has responded to requests for clarification with the following information. In regards to the private equity disparity, a spokesperson for Reuters indicated it was due to the CVCA’s inclusion of acquisitions by Berkshire Hathaway, and investments by middle Eastern sovereign wealth funds, none of which Reuters considers private equity.

The Reuters spokesperson indicated that the company’s methodologies for capturing VC funding are more in line with the CVCA, suggesting that Reuters is likely just capturing a greater degree of funding activity activity from non-CVCA members (including VC deals in Canada that involve no Canadian investors).

Waterloo-based Clearpath Robotics has raised a $40 million CAD ($29 million USD) Series C round. The capital will be used to further expand the…