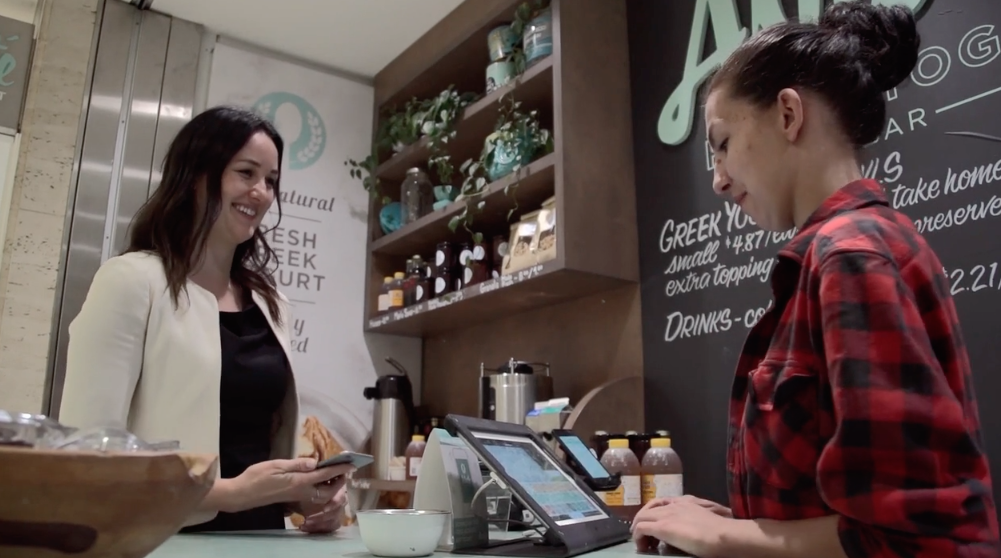 When Asim Shahjahan was a senior manager for TD Securities, one part that was consistent about his day was his breakfast: a $3.45 breakfast sandwich from Freshii, which always got him $1.55 in change after paying with a $5 bill — before he knew it, his desk was covered in change. “There has to be a better way,” he thought. When he found the Freshii app way more efficient, he wondered why more local businesses didn’t have similar solutions.

He found out why after he and his business partner Kelsey Regan decided to look into the potential for this idea, and discovered that employing a firm to make such an app costs $9,800 per platform including HST — so to have an Android, BlackBerry, and iOS app would mean dishing out at least $32,000, with a $65 monthly maintenance fee per location.

“There’s a reason that independents couldn’t really afford their own mobile payment or loyalty solution, so that’s where the idea came from. It became apparent that it was just too expensive. So what we decided to do at that point was to start working on this project,” said Shahjahan.

“Canadians want to pay with their mobile phones, and ReUp offers small businesses a simple way to build a sleek mobile app with payment capabilities that directly caters to this growing demand.”

Almost two years later, Shahjahan is now the co-founder and CEO of ReUp, a customizable mobile app platform starting at just $89 per month (Regan is now head of mobile product and CTO). ReUp’s platform allows local, independent businesses to create their own branded mobile payment app for iOS and Android. Businesses that use ReUp can accept mobile payments from customers, accept physical and digital gift cards, and the company also allows retailers to use plug-in integrations from their own third party choices, including loyalty services, reservations, and order-ahead services.

Recently, ReUp has given retailers the option to accept PayPal as a payment option from customers, and Shahjahan expects that the offering will make ReUp more valuable, as PayPal is currently the most popular mobile payment platform with 65 percent of Canadians reporting they have used it in the past six months, according to a 2015 GFK study.

“Canadians want to pay with their mobile phones, and ReUp offers small businesses a simple way to build a sleek mobile app with payment capabilities that directly caters to this growing demand,” said Alexander Peh, head of mobile and market development at PayPal Canada. “At PayPal, we’re always looking to collaborate with cool startups like ReUp that offer Canadians an innovative way to pay with their mobile phones and better positions Canadian small businesses to compete.”

ReUp started working with Paypal last year after finding that a lot of merchants had no way to accept PayPal in store. “We found that a lot of merchants want to offer PayPal as an option because customers have it, but retailers didn’t have any way in-store to accept PayPal. PayPal technology in Canada isn’t as available as a brick-and-mortar solution, minus you sitting at a computer to receive money in exchange for goods,” said Shahjahan. “For most fast-moving restaurants or businesses, they don’t have a lot of time for that workflow.”

With this offering, businesses can accept PayPal as a payment type at their counter. “The customer can pop open their ReUp app and show they have credit and the merchant can then scan their device.”

Shahjahan said that the value of ReUp comes from the fact that a personalized app means that competitors aren’t potentially sharing a platform through marketplaces like eBay; in his words, more businesses will need services like ReUp because history repeats itself, especially in technology.

“Remember eBay stores. Everyone had their own store, and that’s where ecommerce became accessible for everyone, but you didn’t have many options. You could either hire a big consulting firm for $20,000 to $30,000, or you can go to an eBay store which was a shared platform for everyone,” said Shahjahan. “So what happened in between then and now, Shopify popped up to provide a white label solution for independent and small businesses that didn’t look like it was part of any platform, and gave merchants the ability to express their brand and sell their products.”

The World of Content Is No Longer Flat, Going 360 Degrees with Bublcam

It was 1492 when Columbus sailed the sea to prove his theory that the world wasn’t flat but round instead. His discovery changed our…