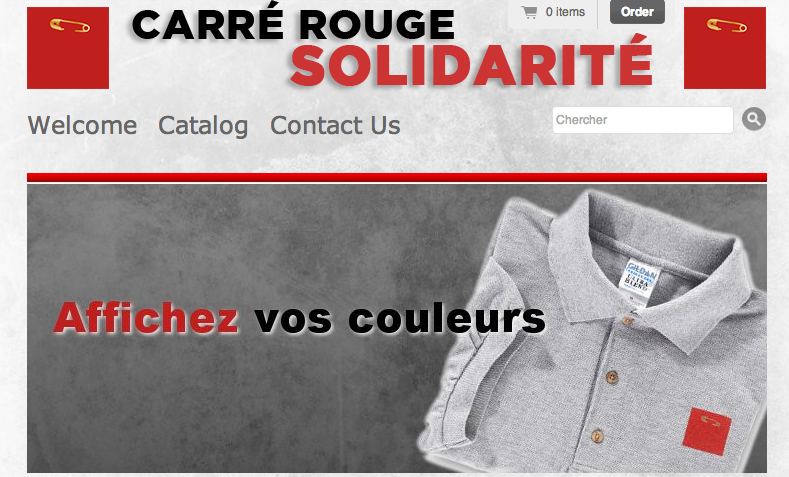 As per the Globe and Mail, a Quebec man has decided to turn the notorious 2012 student protest symbol- the red square- into an ecommerce clothing brand play.

Raymond Drapeau of Longueuil, near Montreal, has started up Carre Rouge Solidarite, offering a small selection of shirts that have the Red Square icon printed on them.

Developing a small clothing business based off of the widely-known Red Square symbol comes with its own set of problems- namely, the fact that earning money off of the sale of such items is likely to draw the ire of those who started and participated in the movement originally meant to initiate social change.

But Drapeau told the Globe that its not about the big bucks, but rather giving a larger platform for something that already gave many people so much meaning. “I saw the red felt squares and said to myself, ‘we could broaden this a little bit and put it on shirts,” he said. The slogan means “show your colours”.

Drapeau thought to act quick and gain the IP before anyone else could. He’s also keen to share the profits with the student groups, but one of the main student groups – Association pour une solidarité syndicale étudiante – said “the matter is being studied and there won’t be any comments for the moment,” according to the newspaper.

As it pointed out, several high profile figures showed their support during the protests two summers ago that originally came from Quebec’s then liberal government’s decision to raise tuition by 75 percent over a five year period. Those include Montreal band The Arcade Fire and Quebec filmmaker Xavier Dolan, who wore the image at the Cannes film festival.

Eventually the protestors broadened the meaning of the protests, bring criticized along the way for straying from one main issue in a disorganized movement without meaning anymore. The province of Quebec spent millions of dollars on police reinforcements, the Liberals lost their power (and one could argue largely due to the students) and several high-profile Quebec politicians resigned, including the former Education minister Line Beauchamp.

When the The leftist Parti Quebecois was later elected as minority government, it halted the tuition increases.

A court has approved the settlement between Kitchener-Waterloo messenger app Kik and the US Securities Exchange Commission (SEC), which was proposed earlier this week….