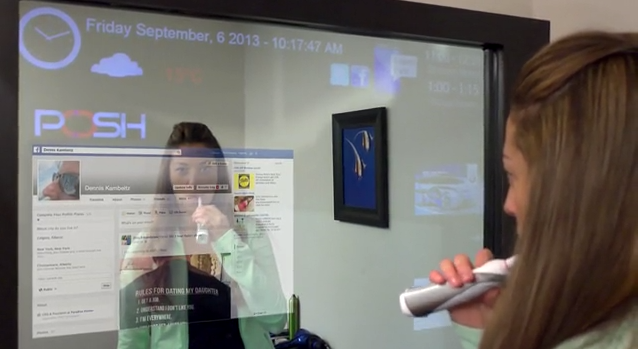 We spend an average of 18 minutes a day or 168 hours a year in front of a mirror doing anything from shaving, brushing our teeth or doing our hair. Calgary-based POSH View wants to maximize this time by making your mirror do double duty as an interactive screen. The iMirror will let you check your email and put on your makeup all at the same time.

The inspiration for the POSH iMirror came after CTO and co-founder Pieter Boekhoff watched the futuristic concept video “A Day of Glass” by Corning. The concept video depicts a world where any surface becomes a screen including your mirror, your countertop and even your windows. Boekhoff told BetaKit that after watching Corning’s video he knew he wanted to make the mirror happen.  A couple of months later they had a working prototype of the iMirror featured at Calgary’s 2012 Home and Garden show.

To get iMirror onto everyone’s wall, the team launched a Kickstarter campaign late October to raise $200,000. But the campaign has run into some difficulties in drumming up the necessary funds, mostly due to the price of the product. With only five days left to go, iMirror has only raised about fifteen percent of their $200,000 goal.

In direct response from the feedback they gained over the course of the campaign and in an effort to make it to the finish line, POSH View has reduced the perk price of the iMirror by more than half from $2,700 to $1,449. The reduction in price was made possible by working with their engineering team to find cost savings in choices like reducing the size of the mirror down from 50” to 40”.

But even with the price reduction, at $1,500 the iMirror is competing with things like a smart TV and tablets which may continue to pose a problem.

Perhaps to further justify the hefty price tag, the team recently partnered with Toronto-based Gesture Sense to bring gesture-control to their product. Gesture Sense will add a low-cost, infrared sensor solution to the iMirror which will make it a triple threat in terms of control: touch, voice and gesture.

Voice and gesture are expected to be integrated into some of the twenty stock apps which will come out of the box with the iMirror which POSH View will develop. Apps like calendar, weather, traffic, live Twitter feeds and social media dashboards are currently being planned for the interactive screen. In addition to the apps that POSH View will be building, the team is evaluating the ability to support Android apps to help build an immediate app ecosystem for the iMirror.

Boekhoff told BetaKit that they have a number of marketing pushes over this last week to help their active crowdfunding campaign succeed. But if the current Kickstarter project doesn’t make it, he did confirm that POSH View won’t be giving up. They have already begun looking at alternative solutions to allow for pre-orders to happen once these five days are over. They are also in final negotiations with Hotel Arts in Calgary for POSH iMirrors to be used in their hotel rooms and lobby.