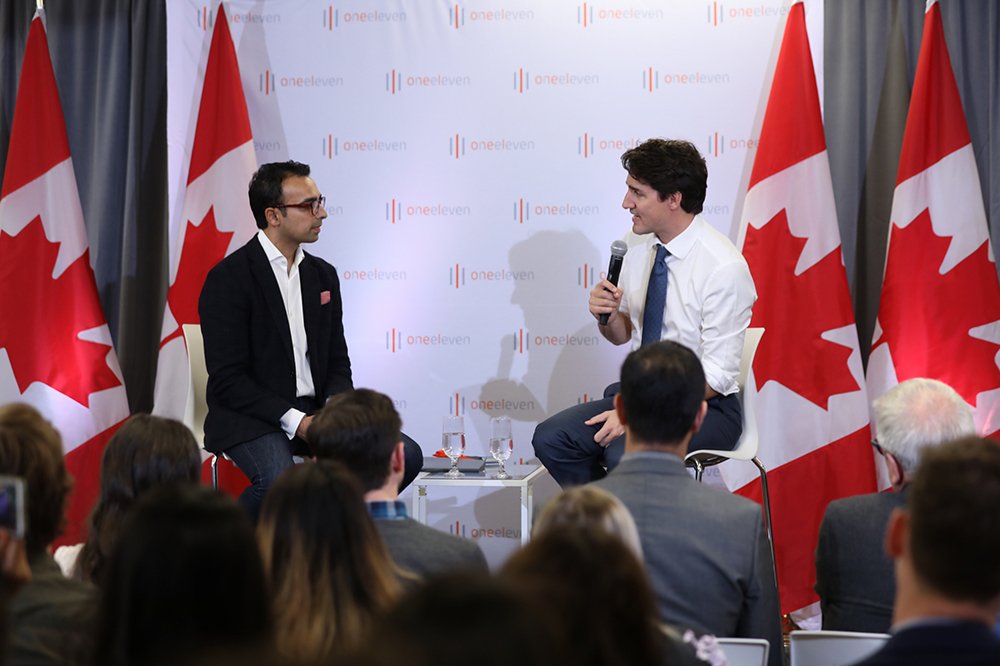 As Toronto-based OneEleven celebrated the launch of its new 250,000 square foot space, Prime Minister Justin Trudeau stopped by the scaleup-focused innovation hub for a town hall with the city’s tech community.

During the visit, Trudeau had the chance to tour the hub and talk to the startups that called the space home. “It’s great to work in a culture that promotes innovation and diversity — one that has allowed us to continue to be based out of this great country, while still developing leading edge technologies with tier-1 talent and work with multi-national customers at the same time,” said Saif Ajani, CEO and co-founder of Keyhole, which works within OneEleven.

Sitting with Bilal Khan, managing director of OneEleven, Trudeau tackled questions like attracting capital to the country, the importance of diversity in Canada, and our own challenges in becoming a global tech hub.

“We’ve always had brilliant entrepreneurs, great startups, great ideas, launched great things, and then they reach this moment where some big American company is willing to offer them $100 million, buy them out, and take the company south to Silicon Valley. That’s been the story of so many companies in this country and so many brilliant minds that have been poached,” said Trudeau, who said that we need do more than just be a “branch economy to the bigger economy that is immediately to our south.”

Khan asked what it will take to attract more foreign capital to the country — and while a gap in capital is generally seen as a major barrier facing scaling companies, Trudeau countered that having more access is not necessarily the sole solution to this challenge of brain drain.

“The challenge is drawing [capital] in the right ways to be able to create homegrown success stories in Canada, and allow it to scale up. And part of that is that Canadians haven’t always been great at tooting our own horn, and we are also extraordinarily adaptable,” Trudeau said. “Canadians do well when you plunk them down in London or Paris; whether you move them to California, Singapore, or Dubai, Canadians do well. So it’s always been easy to sort of pull great Canadians out there around the world.”

Lots to see at #111Hub – thanks for the tour & talk on working together to support entrepreneurs & create a culture of innovation in Canada. pic.twitter.com/DhBMIJy15S

However, Trudeau believes that what does attract more global capital to a region is stability, both politically and financially. The fact that Canada has both makes it “an interesting place.”

“Add on to it access to markets south in the United States, across the Atlantic and Europe, and our deep ties to Asia that are growing. There’s a really an exciting moment for Canada right now,” Trudeau said. “It’s getting people to notice and getting people to want to be part of, instead of suck away from.”

And what’s getting people to notice Canada, especially in comparison to the US, is its openness to immigration. As members of the audience asked Trudeau about how the government can encourage more immigrants and their families to come to Canada, Trudeau suggested that his top priority was preserving Canadians’ confidence in the immigration system.

“Populists and nationalism is a response to an anxiety that people are no longer creating successful immigration systems and paths. If there becomes a sense that immigration is no longer contributing to the wellbeing of our communities and to our economies, then support begins to slip away,” said Trudeau. “I’m trying figure out how many people we can bring in to a maximum number, and give them the tools and the path to succeed in a reasonable, rapid way.”

When Wilfrid Laurier was dealing with a large wave of immigration to Canada, he established railroads, grain elevators, and land to help people get settled in the country. Trudeau likened that Canada’s current situation. “What we have to make sure we’re figuring out now, is what are the railroads, and grain elevators, and land of the 21st century. It’s education, language acquisition, it’s stem abilities, and it’s openness to the values that define and drive Canadian society.”