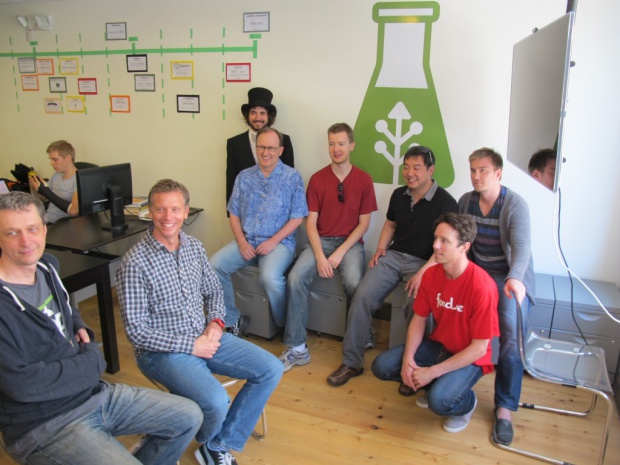 They come in different flavors, and they’ve been around for a while too. Accelerators and incubators are nothing really new or novel, but, like most good businesses, the ones with great leadership, vision, mentorship, and connections can make a big difference in the lives of many entrepreneurs.

When Vancouver’s GrowLab put out the call for its first cohort in the Summer of 2011, over 350 teams answered the call. As important it was for those first five startups to join, it also marked a moment when the Vancouver startup ecosystem started to take on a new life.

In March 2012 Mike Edwards assumed the role of executive director. On November 1 he officially passed the title (and leadership torch) to Jonathan Bixby.

Under Edward’s watch a lot has changed at GrowLab. While not the only “game in town”, it’s fair calling it a key startup hub in Vancouver. We recently had a conversation with Edwards and Bixby about entrepreneurship and the startup life.

One can’t label Edwards as a member of the Vancouver “tech establishment”, but the trajectory he’s been on might leave a few people breathless. “Three years ago I rolled back into Vancouver and set myself up in a coffee shop, saying to my wife that it would be hard to break in,” Edwards told BetaKit. “Did that for three month, spending two days a week working out of the coffee shop trying to navigate the scene, and figure out how best to break in. Yet two and a half years later we have 12,500 square feet of office space, with 175 people working here, over $20 million raised, and have created more than a 100 new jobs. Being able to add value to the Vancouver, BC, and Canada is incredibly exciting.”

Acknowledging his time is “sliced pretty slim”, Edwards is pleased about bringing Jonathan Bixby on board as the new Executive Director. Bixby has two successful exits under his belt, including most recently cofounding and leading Strangeloop Networks to exit, while maintaining the title of “Best Employer in British Columbia” for five consecutive years. Edwards said the fact that “Jonathan has the benefit of having built companies, built teams, having an established international network, and is already mentoring a number successful Canadian companies in Canada, means he’s coming at this from a much higher and stable place than from what I was coming from.”

They both see the entrepreneurial landscape shifting in a more positive direction, citing the value of some key assets we have in Canada. For instance, the federal government has put $400 million towards the Federal Venture Capital Action Program, then further investing in the whole cycle by allocating $100 million towards early stage tech (GrowLab is a beneficiary). Additionally there’s the important partnership role played by the Business Development Bank of Canada (BDC), and the federal government also committing another $60 million to the IRAP-CAIP funding program, which could help the likes of Launch Academy, BCTIA, BCIC or WaveFront. Bixby and Edwards said “there’s a community that wants to support growth and talent.”

To that Edwards answered, what can we do better? By suggesting “everyday we can dream bigger. We don’t need to ask anything of anyone else, we need to ask ourselves, how we can do this better, how can we do this faster, how can we leverage these great assets availed to us, because there’s more than enough”

From Bixby’s personal perspective, “once you have a safe place to start something, it’s not as difficult to reach to the next level. This location (GrowLab & Launch Academy) is an example of such a place. Vancouver’s starting way further ahead now than when I launched my first startup. You can look back at a couple of big successes like CREO or MDA, but there was a huge gap after that. Now we’re seeing the gap filled by companies like Hootsuite, Vision Critical, Build Direct. There’s the potential for going public or raising bigger rounds of financing, and it’s setting an example to younger entrepreneurs that this can be done in Vancouver. Seeing success at the top of the market will help pull everyone up.”

“We’re trying to foster the attitude and belief that “hey, it’s okay to be an entrepreneur,” said Bixby. He adds “it’s fulfilling, it can sometimes be lucrative, and you only live once… so we’re trying to create a sense that it’s something to aspire to instead of being fearful of.” The theme of the conversation played back to the importance of creating an environment where it feels safe to try, to test, to fail, and possibly even rinse and repeat a few times.

Given the investments being made, it’s fair asking if someone’s a born entrepreneur or whether entrepreneurship can be taught. Edwards was unequivocal. “Absolutely we can teach it,” he said. “At the core it’s about execution. It’s about putting a team together, executing against bigger and bigger goals, it’s an iterative process, that can be taught, can be analyzed, can be studied, can be ripped apart, and has a metric analysis to it. If you can execute everyday (ascribe to Kaizen) constant improvement you will build a successful company.”

We agreed that it’s also time to reconfigure our view of the entrepreneur life. It’s time to quit reading the headlines, and to quit buying into the myth of glory, overnight success and riches. While encouraging the pursuit, Bixby also has the scars to prove that entrepreneurship “is hard, bloody work; it’s sacrifice.”

GrowLab will grow. More importantly, the current and future cohorts will keep benefiting from a healthy dose of realism too.

Is it worth your time to be excellent?

You’re not where you’re supposed to be. You’re not a failure. You’re actually doing well. You have a way you present yourself at parties…