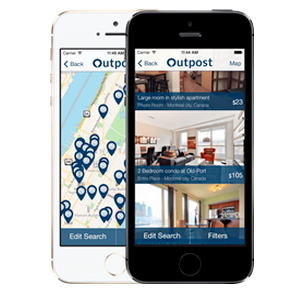 Outpost Travel, the Montreal-based startup that helps people find rooms, rides and experiences all through sites like Airbnb, 9flats, ridejoy and more, has released its iOS app.

The company calls itself the biggest and most extensive search engine for the sharing economy. Now it’s releasing the new app, “the first mobile app to offer users the ability to browse and book accommodations, rideshares and unique experiences from over one million listings.

“We’re excited to deliver a user-friendly mobile experience that brings together the massive amount of  travel data we’ve put together at Outpost over the past year. This marks a major milestone in our goal of raising awareness about the Sharing Economy and helping people travel more easily and affordably,” said cofounder Ovi Mija. “Outpost helped thousands of travellers find a place to stay in 2013. This year we want to make it even easier by putting that same experience in their pockets.”

Booking with Outpost is simple, like most aggregators or different companies offering the same service.  The user experience is focused around high quality pictures that give you a perfect idea of what to expect. Gone are the days of not knowing what a room will look like, boasted the company, as Outpost” shows you every corner of the place.”

In November the company raised $200,000 in its first seed round, from an angel-led firm called YOLO Ventures, also based in Montreal.

A few months before that it had declared itself the biggest aggregator in the P2P travel industry.

The story of the two cofounders, Ovi Mija and Hamed Al-Khabaz, is a well-documented one. The pair we’re essentially kicked out of their CEGEP college in Montreal when Al-Khabaz repeatedly showed school administrators how simple it was to hack into a school portal software. As a result, personal information of thousands of students could be compromised.

What followed the Financial Post’s coverage was a flurry of coverage on the pair’s new startup, from several reputable publications like Forbes, La Presse and the New York Times.

The pair of cofounders also had a pretty cool experience at last summer’s International Startup Festival, when notable “super angel” Dave McClure of 500 Startups emailed them $500 to help buy a new laptop, after the one they were using to pitch kept shutting off.

Portag3 Ventures has closed a $427 million CAD second fund, the largest FinTech-focused venture capital fund in Canada, and one of the largest globally….