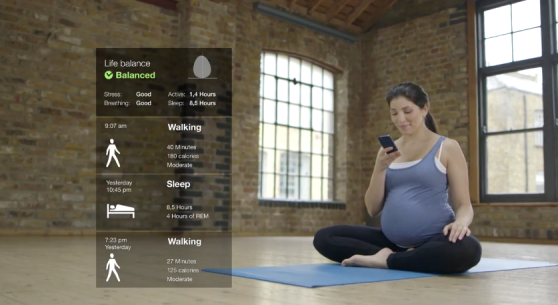 Possibly the coolest thing about this story is that the guy who runs the $35 million Mistral Venture Partners is actually named “Code”. His full name is Code Cubitt. It really doesn’t get any better than that.

Cubitt formerly worked for Motorola Ventures, and he’s the former COO of Zephyr Technology. Now he’s been appointed a Director with OMsignal.

“We are thrilled to be working with the team at Mistral,” said OMsignal’s Stephane Marceau. “The firm’s experience and strong connections in Silicon Valley have been exceptionally valuable. In addition, Code’s track record of success as an investor combined with his experience as an executive of one of the largest bio-sensing apparel companies in the world is uniquely relevant.”

(I’m just going to go out on a limb here and guess that Mr. Cubitt is proficient in software developing. Possibly, he even studied computer science as an undergraduate. Likely at Waterloo)

“I’ve participated in the wearables market for a number of years as both an investor as well as an executive. When I met the team at OMsignal I knew that they had learned from the pioneers in the space and had moved a full generation forward,” said Cubitt. “By focusing on the wearability and fashion aspect of intelligent textiles, OMsignal has found the formula for unobtrusively capturing our bodies ultra-valuable bio-feedback signals.”

OMSignal’s products can create a big splash in both the physical monitoring and athletic clothing markets. Both younger athletes and older people concerned about their health can envision the day where most signals that their bodies emit- physiological, emotive, ECG data and more- can be collected and analyzed to increase wellness and performance. That day should coming soon as a result of the investment.

This was also the vision that cofounders Marceau and Frederic Chanay shared back in 2011 when they started working on the technology. Prior to that the pair worked together at a major US telecom firm developing a mobile health app that could capture users’ moods based on a bracelet. While their employers moved on from the idea, Marceau and Chanay didn’t.

“We always stayed with this impression that we have all this technology that helps us stay with the world outside, but none of it is used to capture the world inside of us,” Chanay told Techvibes. “We were really interested in capturing data about yourself to help you understand what makes you tick.”

The shirts are designed for everyday use. Physiological signals acquired from the body are filtered and interpreted to deliver useful information and actionable insights to consumers, health and medical practitioners. The information and insights derived from OMsignal include ECG, activity and respiration rhythms as well as a measure of tension level or “emotive” states.

Interestingly, OMsignal’s has worked together with another Montreal-based biometric clothing producer that has been making noise lately: Carré Technologies. We recently reported that the company’s Hexoskin crowdfunding campaign reached its funding goal of $100,000 after two weeks.

The Hexoskin shirt is integrated with 100 percent textile biometric sensors designed to be comfortable and machine washable. The sensor-filled shirt plugs into the Hexoskin device which sits in a pocket of the garment, and records  and sends body metrics to a Bluetooth connected device, like a smartphone. The data collected can then be interpreted in an app to help you optimize physical training, monitor stress and even improve sleep.

Cofouder Fred Channay told me last week that the more success Carre Technologies achieves (with successful crowdfunding campaigns like last week’s), the better it is for everyone. The manufacturing price goes down, which means OMsignal can also decrease their price.

Nathan Bashaw is the co-founder and CEO of Hardbound. After discovering the world of startups during college, and driven by the desire to build…