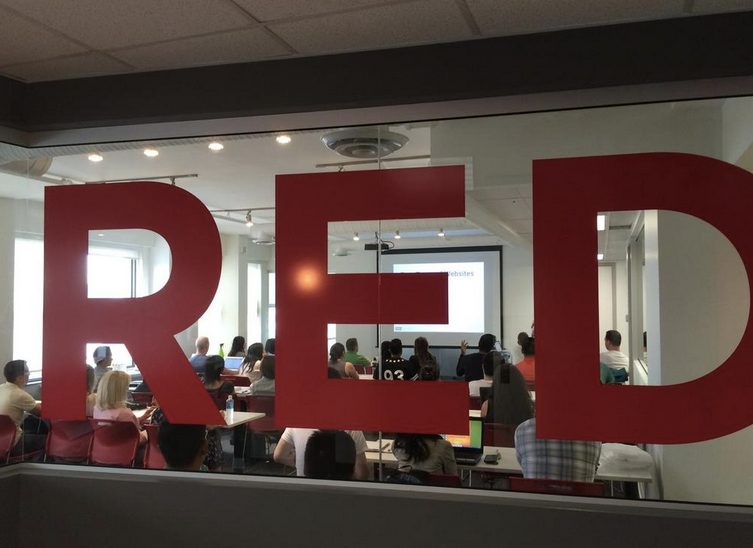 “There’s a disconnect, as we’ve got one of the most educated generations in history, but we’re still looking at 15 per cent unemployment.”

Before the inspiration for this new education hub, there was the frustration. “As a Managing Partner with a web agency in Yaletown (Drive Digital) that’s grown to 150 clients and 20 employees, I’ve seen that one of my biggest challenges was hiring people, especially at a junior level,” said RED Academy Founder Colin Mansell. “There’s a disconnect, as we’ve got one of the most educated generations in history, but we’re still looking at 15 per cent unemployment. Traditional education is not keeping up with the skills that are needed.”

Instead of twiddling his thumbs hoping for the education sector to change, Mansell decided to take on the challenge himself – and celebrated the launch alongside his team with bean bags and beer taps.

How is RED Academy doing it differently? RED’s industry partners include big technology firms like Telus and Hootsuite, Live Nation and others – and the Academy doesn’t just advise on what skills need to be taught, but allows for students to work on real-world projects right out of the gate with the skills they’re learning in class.

That industry-focused approach is essential, as grads increasingly need to refine their skill set to what’s in demand. “The complexity of coding has increased exponentially,” explained Mandi Wise, Lead Web Development Instructor and Head of Curriculum. “The barriers to entry were a lot lower when I first started out, when I was 15, building Geocities sites. Then, I could teach myself basic concepts, but now, to be a front-end web developer, those expectations are so high for when they walk into their first job.”

RED Academy is also offering a more open learning environment compared with a traditional classroom setting – a key difference from other schools, according to Lindsay Henwood, Lead UX Design instructor. “In more conventional style teaching, you get the theory, but not necessarily the practice and repetition that you need,” Henwood said. “From day one, the students here are diving into it. In contrast, I remember teaching a few workshops with university students and you could see what they were missing – with a gap between what they have at graduation and what they need to get a job in the tech scene. RED Academy is a bridge.”

Toronto-based Figure 1, a medical sharing app known as the “Instagram for doctors,” has raised a $13 million Series B funding round. Figure 1’s…