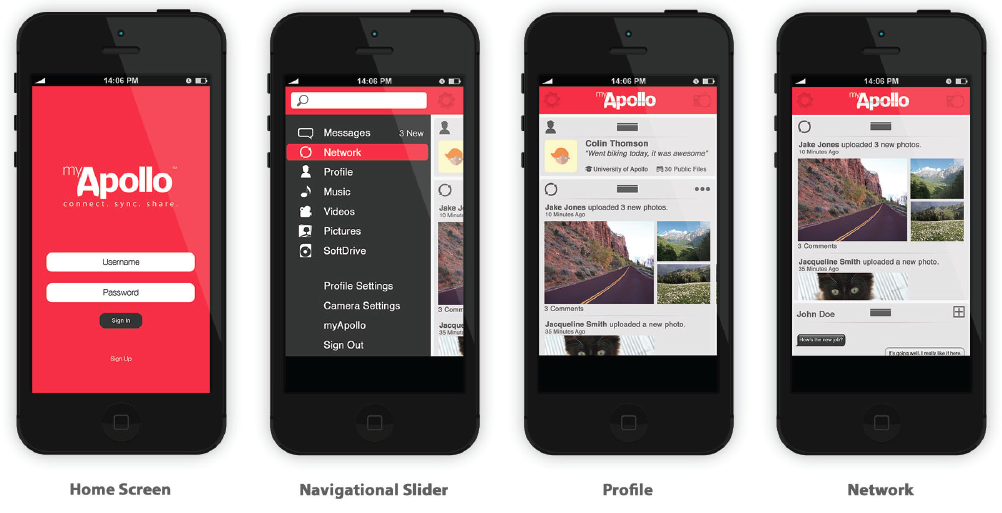 If Facebook, Google Drive and iTunes had a baby, it could very well look like the new social network launching next week called myApollo. myApollo is just as ambitious as the moon mission its name is taken from.

The company is calling itself a “super” network rather than a social network since their platform combines social networking with cloud storage and file sharing all in one place. myApollo will be launching first as an Android app on September 6 with iOS, PC and Mac apps to follow later this fall.

myApollo is the brainchild of Arroware Industries Inc., a Toronto-based company co-founded by two young entrepreneurs in their mid-twenties. The platform converges two digital game changers: social media – which has changed the way people come together and communicate and cloud computing – which has revolutionized how we share and collaborate media. myApollo blurs the lines between talking with your friends and sharing your complete music collection by providing an environment where all of this can happen.

“I saw what was going on in social media and cloud computing, and wanted to find a way to integrate these technologies, in order to improve upon what was already out there and unlock further potential in what those guys weren’t allowing,” explained 26-year old CEO and co-Founder Harvey Medcalf.

Those other “guys” Medcalf is referring to are the social titans myApollo will be going up against – a bold feat where others have failed before. But Medcalf isn’t scared.  “We had an ambition to make something that appealed to us, as users of the product,” Medcalf explained. “We came of age in the era that spawned the internet as we know it today, so who better to affect further change on that very system? We have really always thought we had something that would be that next big thing.”

With many recent reports suggesting that teens are growing weary of Facebook, especially due to the number of adults (including parents) who are using the site, its anyone’s game when it comes to new entrants in this space. The fact that myApollo is the new kid on the block and the company has plans for a huge marketing push during Frosh week bodes well for its success. Like any network, the success is tied to the number of users available to connect with. myApollo will need to attract a sizeable chunk of the average 300 friends a typical teen has on Facebook to make this network worth their while.

BetaKit was given a preview of a working demo of the Android app while at the launch party earlier this week. At first glance, the social app looks a lot like what have seen before. The user has a social feed which shows messages and status updates from your community. Perhaps where myApollo differs is in the priority it gives to media. Photos and videos have their own dedicated areas and your profile page has a music player up front and centre for you to listen to songs you’ve either uploaded yourself or that have been shared through your network. The mix of messages and media makes myApollo feel more mySpace inspired than it is Facebook.

The app was slightly clunky in its performance (hopefully something that gets ironed out before launch) but was relatively intuitive and engaging. It’s use of red as a signature color-scheme is bold and couldn’t be more opposite to Facebook’s cool blue if it tried.

Where myApollo shines is more in its cloud computing capabilities. Medcalf demoed taking pictures on one device to have them show up on another automatically and the same with videos that were taken throughout the night. In addition, the app showed off myApollo’s lack of cap on file size and length of content users can store and share. Demo devices boasted complete hour and a half movies available to watch as part of a user’s collection.

Files shared through the myApollo network can be downloaded to new devices,and re-downloaded by other users in the network or exported out of the network. The effect is similar to a customized, personal intranet where rich media such as high-definition video, data sets or artwork portfolios is made available on-demand.

Medcalf told BetaKit that the app will first launch on Android because they felt that this platform was often overlooked to get something first to market. The app is on schedule to launch on September 6 followed by iOS, PC and Mac apps later this fall.