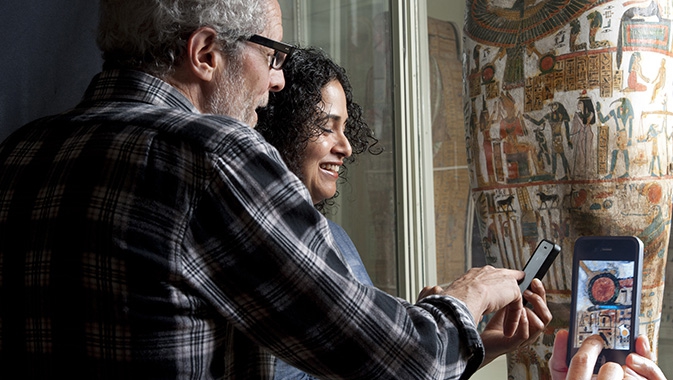 If you grew up in the GTA like me, your elementary school experience was likely filled with perennial trips to the Royal Ontario Museum (ROM). There you got the day off of school while your educational experience was gladly justified by checking out a few exhibits and lounging back in the IMAX theatre, watching films about sharks and stuff.

It looks like the next generation of smartphone-wielding ten-year-olds (and every other visitor to the ROM) will get to combine the lovely ROM experience with augmented reality now. That’s because today the ROM announced the launch of ScopifyROM, an exciting new smartphone application that allows visitors to experience ROM objects in fun and interactive ways, including Animating a dodo, X-raying a mummy, and Skinning a dino.

(Let’s be honest: you wish your boss would take you back once a year too. It could provide “inspiration” for that new module you’re developing).

Developed by Toronto-based production company Kensington Communications, ScopifyROM is a digital discovery platform that allows visitors to interact with select objects throughout ROM galleries in ways never before possible in any museum.  By using their smartphone as a series of “scopes”, visitors can uncover exclusive ROM research and curatorial secrets. The app is available for download via the ROM website.

“ScopifyROM is an exciting and important enhancement to how our visitors experience the ROM, said the ROM’s Dan Rahimi. “With the debut of the app, a first for all museums, visitors can gather information about our changing natural and cultural worlds from a range of experts throughout the Museum, all in the palm of their hands.”

With the exclusive range of custom-made ScopifyROM tools, visitors can Animate, X-Ray, Scan, Magnify and otherwise “Select” ROM objects. Using the app, users can “restore” destroyed structures to their original form; use the “periscope” function and travel high up in the air to examine objects from a unique perspective; decode and decipher various codes and languages; see an object in its original setting or where it was discovered; and add skin to skeletons and see what they once looked like.

“We’re pleased to work with the ROM as the debut museum for the Scopify app,” said Kensington Communications’ Robert Lang. “Scopify is the latest project in Kensington’s long commitment to produce innovative interactive media; working with the ROM and its world-renowned curators builds on a wonderful collaboration which began with our hit TV series project, Museum Secrets.”

The app features over a dozen objects to investigate with ScopifyROM, spread over the ROM’s Ancient Cultures, Biodiversity, Earth & Space, World Art & Culture, and Canada Centres of Discovery.

After visitors Scopify the ROM, they can unlock five games in order to interact with the ROM’s collection and challenge their investigative skills up close: “Footprints” is a time-sensitive, mix ‘n match memory game while Bat Hunt is an arcade-style game where players let their device come alive in order to fly and steer one of three bats. Other games include “Coin Conundrum”, “Crossbow Defender”, and “Dino Dig”.

Deloitte has announced the 2020 winners of its Technology Fast 50, a program that highlights Canadian tech companies’ innovation, leadership, and rapid revenue growth…