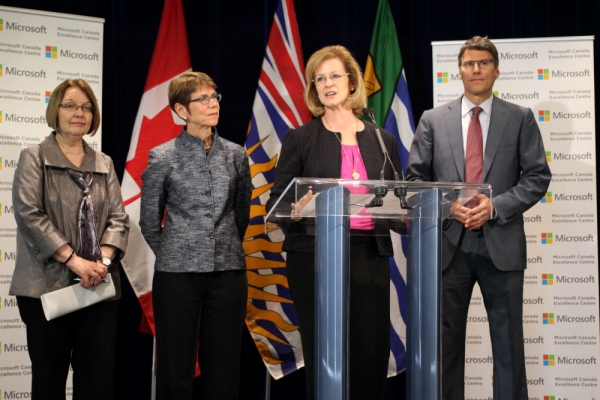 Microsoft will open a new training and development centre in the Pacific Centre in the heart of downtown Vancouver. The new location will create 400 new jobs and will contribute $90 million annually to the Canadian economy.

The new “Microsoft Canada Excellence Centre” (MCEC) is slated to open by late 2015.

“Vancouver is a vibrant international hub for technology development with growth potential given its attractive location, amenities, reputation and proximity to top British Columbia universities and a highly-educated and diverse workforce and population,” saidMicrosoft Canada president Janet Kennedy. “This investment will enable us to create a world-class centre of training and innovation that will have a positive ripple effect across the local, provincial and national economy.”

A recent study by Ernst & Young LLP said the new location would result in more than $181.4 million per year in direct, indirect and induced economic growth.

Beginning in the summer of 2014, Microsoft will hire its first new full-time employees at the MCEC focusing on software and services engineering, program and solutions management in Microsoft’s Applications and Services Group. This group is responsible for all of the research and development across Microsoft Office, Office 365, SharePoint, Exchange, Yammer, Lync, Skype, Bing, Bing Apps, MSN and Advertising platforms.  Teams at the MCEC will be from a subset of these organizations.  Eventually, Microsoft expects the MCEC to create 400 new jobs inVancouver, more than doubling its local workforce.

In addition, Microsoft will establish the “Foundry Vancouver” program to provide opportunities to over 50 students drawn from Canadian universities. This paid internship program will give development and design students enrolled at Canadian universities the chance to participate in a 16-week intensive program on building applications for Microsoft’s latest platforms and devices. This program builds upon existing work with Canadian universities and the first 25 interns are expected to begin work by this summer.

Since the inception of the Microsoft Canada Development Centre in 2007, Microsoft has steadily grown a thriving workforce in British Columbia. In 2009, Microsoft acquired Big Park Studios, home to Next Generation TV experiences like NFL on Xbox ONE; in 2012, Black Tusk Studios was launched; and in 2014, the award-winning Gears of War franchise was added to Microsoft’s gaming portfolio in Vancouver. The business currently employs approximately 300 full-time employees who focus on the development of cutting edge entertainment technologies, products, and services for Microsoft XBOX and the company’s larger business.

In addition, Microsoft has helped provide development opportunities for Canada’s youth as part of its YouthSpark global initiative.  Since September 2012 launch, YouthSpark has reached over 5 million youth in Canada.  Through work with key YouthSpark partners, Microsoft’s efforts in Canada support opportunities for education, STEM enrichment and career aspiration, innovation and children’s health. In Canada, Microsoft has partnered with Boys and Girls Club, Frontier College, Youth Science Canada, Shad Valley, and Children’s Miracle Network to deliver YouthSpark programs in BC.

In 2014, through the support of a Microsoft grant, Kids Learning Code will be extending programming to British Columbia.  In 2015, Pathways to Education, which has received more than $1 million in-kind and cash grants from Microsoft, will open a new location in Vancouver. Microsoft’s ongoing commitment and investment to developing and creating opportunities for local youth will play a key role in improving the long term economic growth of Vancouver, the province, and Canada as a whole.

“The Vancouver expansion of one of the world’s most innovative technological firms is recognition of Canada’s talent pool and investment climate,” said James Moore, Minister of Industry.  “It is also a validation that Canada is well positioned to take advantage of the global opportunities of the digital economy.