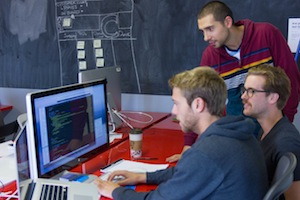 Brainstation, a new Toronto-based coding school that demands a smaller time and money commitment than other schools like Bitmaker Labs and Codeacademy, is set to launch its first program in early January.

Brainstation calls itself a progressive technology school in Toronto offering “education for the next generation of creators.” The program was designed by the former founder of Bitmaker Labs for individuals of all skill levels. A 12-week, part-time night course costs about $3,500, which revolves around small class sizes and hands-on, project-based learning.

Just five spots remain available for the school’s first class of students, and about a month into the program the school will also host a hackathon for 200 developers to try and shed more light on the accessible world of coding.

Accessibility is the word for this new program. Cross-town Toronto coding school Bitmaker Labs offers an intensive, nine-week “bootcamp” that costs $9,000 per student. Duncan McCall, the former Bitmaker CEO who left to launch Brainstation, evidently must have had a change of heart over what kind of an offering would suit modern, primarily adult students.

He hooked up with fellow cofounders Apoorv Gupta, Jason Field and Alex Karasyov to offer something different. Brainstation allows those potential students who wouldn’t be able to take the leap of faith into a nine week fully immersive program-  whether it be from money worries or time commitments with other jobs- to get a taste of coding. “Maybe they’re at a point where they’re looking for a shift in their life,” Field told BetaKit. “This allows them to maintain their job and their career, and keep the cash flow coming in while they come into this program. If at the end of the 12 weeks they’ve sparked an interest in coding and want to continue we’re happy to be a part of that change.”

And if not? “I guess they’ve taken that shot and they still have their jobs without leaving that income,” said Field.

Even Field admits that $3,500 in one lump sum (let alone $9,000 for other programs) is a big ask for some people, particularly for a program beginning after the Christmas spending season. To help alleviate some of the financial pressure, Brainstation has paired up with a third-party financial institution to help work out a steady payment program for students.

Scholarships are also available to Canadian Forces members and women. “We’re really trying to make this as accessible as possible,” said Field.

We think it should work out for them.