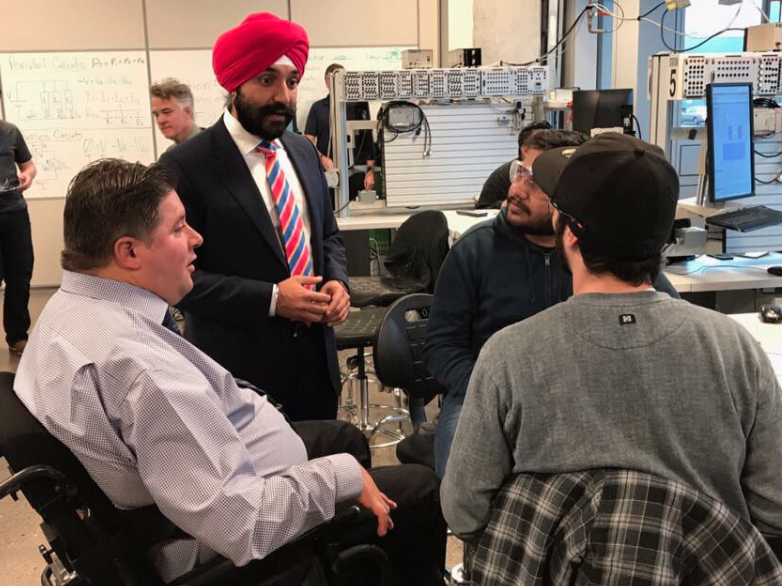 Minister of Innovation, Science, and Economic Development Navdeep Bains announced the last shortlisted supercluster yesterday in Vancouver, where he said BC’s focus would be on the Digital Technology Supercluster. Telus, D-Wave, and six postsecondary institutions are part of this cluster.

Bains has spent the past week unveiling the shortlisted superclusters — which will take a piece of $950 million allotted by the government — in each region.

The Oceans Supercluster was the first supercluster announced in Halifax early this week, while Quebec had two superclusters: Mobility Systems and Technologies, and AI-powered Supply Chains.

“It’s not about one particular sector, it’s about platforms that can impact so many different sectors.”

In Toronto, the government announced two superclusters for the province of Ontario: the Advanced Manufacturing Supercluster, which encourages collaboration between technology and manufacturing sectors to create new solutions. Communitech, MaRS, Miovision, the University of Waterloo, and Maple Leaf Foods are part of this cluster.

The Clean, Low-energy, Effective, Engaged and Remediated (CLEER) Supercluster will tackle global energy and environmental challenges in Canada’s mining sector while also working to position the country as a cleantech leader. The Canada Mining Innovation Council, Agnico Eagle Mines, and Barrick Gold are part of this cluster.

Speaking with BetaKit, Bains said that the supercluster plan is about promoting collaboration between parties with vastly different perspectives. “That’s where a lot of new ideas are generated, that’s where the opportunities exist, and that’s when companies grow. So for us, it’s an opportunity to promote a culture of collaboration.”

Two more superclusters were announced in Calgary for the prairies, including the Smart Agri-food Supercluster, which will work to add informatics, connectivity, and traceability in the crop, livestock, and agri-food processing sectors. TELUS, Farmers Edge, BIXSco., and Olds College are part of this cluster.

The Smart, Sustainable and Resilient Infrastructure (SSRI) Supercluster will work to revolutionize the design, construction, and operations of infrastructure. The plan is to use advanced digital communications and interconnected applications and services to make Canada a leader in this sector. PCL Construction ManagementLedcor Group of Companies, and Barry Johns Architecture are part of this cluster.

The Digital Technology #Supercluster would advance the development of #digitaltech in Canada #Vancouver https://t.co/w1oNn97XDy pic.twitter.com/gvOgYsuAST

In Saskatchewan, Bains announced the Protein Innovations Canada cluster, which will work to take advantage of export market opportunities for safe plant-based food and feed by stimulating collaboration in tech and supply-chain infrastructure. AGT Food and Ingredients, Dow AgroSciences Canada, and the University of Saskatchewan are part of this cluster.

While entrepreneurs in the past have been vocal about the need for the government to pick winners, there have been critics that say the supercluster plan could turn into another regional economic subsidy.

“We firmly believe we need to identify areas of high growth, and the way we do that is through the $950 million commitment of matching investment that are made by these superclusters,” Bains said. “These are initiatives led by the private sector, and we determine those plans that have the best economic benefits, ones that are focused on jobs, and lock a lot of money for research and development, promote more commercialization of ideas, and really strengthen supply chains.”

While Canada’s tech ecosystem is known for its strong healthtech startups, healthcare is a sector notably missing from the list. To that, Bains said that it’s a space that intersects with some of the clusters actually chosen.

The CLEER #Supercluster has the potential to further our leadership in #cleanenergy – congrats on being shortlisted! https://t.co/3AY6B0cbIj pic.twitter.com/NuqvQDiRGr

Shortlisted applicants have until November 24 to submit their full applications, will five clusters ultimately chosen by 2018. To keep chosen clusters accountable, Bains said that it will employ a not-for-profit model.

“The money goes to the consortium, and there will be metrics around governance. We will make sure we look at diversity at the governance level, inclusion, measures around where commitments are made, how money is being deployed; is it meeting the mission and objective,” he said. “The not-for-profit model and governance aspect will provide that level of accountability.”

The government obtained 50 proposals involving over 1,000 firms and 350 participants. The goal of the $950 million initiative is to include companies, startups, not-for-profit, and academia into consortia with a common goal.