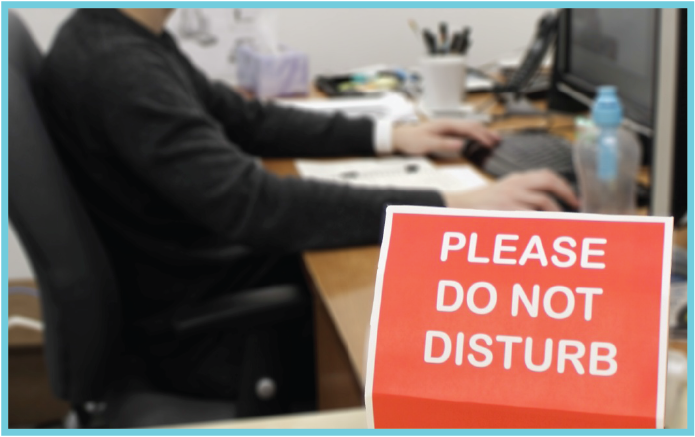 Toronto-based startup CanFocus Technologies has launched its Kickstarter campaign for its MyFocus, a small button that helps users “interrupt the interruptions” with the push of a button.

An email, smartphone, desk phone, laptop or tablet will distract users on average every seven minutes, while statistics reveal that it takes 15-minutes to gain proper focus. “We need to take back control of our devices,” according to the startup.

The MyFocus button shines green when a user is available to answer calls, texts, tweets, skype calls and anything else. But when the users presses the button, it turns red. This tells everyone around, both online and in person, that that person cannot be bothered.

In what can only be described as a well-thought out marketing campaign, CanFocus produced a great explainer video that wasn’t like typical three-minute videos produced by so many of today’s startups (of, shall we say, “lower quality”). What’s even more impressive is CEO Paul Chipperton is the one doing the talking during the entire video, that actually features decent acting.

Chipperton is a serial entrepreneur with an unusually strong track-record in Biotech. He led his last company, Profound Medical Inc, through the 2008-2011 credit crunch to Canada’s largest Series A venture capital financing for a medical device company. Along the way he generated financing of more than $ 16M, and accolades such as the province-wide 2010 Ontario Premier’s Catalyst Award for “Start-up with Best Innovation.”

Back to the device, it’s very simple: a usb connection joins the button to a Mac or PC, which prompts a few “next” buttons for the user to click. Once that’s done it’s up and running in a short amount of time.

The only possible downside is the in-person component. Ideally, coworkers will respect your request for concentration by not talking to you when they see that the button is red, but that won’t stop everyone. Nevertheless, most of our distractions come online, and wiping out all of those little notifications will be enough to garner interest from Kickstarter browsers and techies alike.

The CanFocus team is building small batches of MyFocus by hand, and they’ve been using the device for six months already. I’d imagine that’s a lot of productivity. The team is looking for $129,000 to complete necessary upgrades, and to release a consumer-ready product for the 2013 Holidays across most common systems.

Currently it will cost consumers $79 for the MyFocus button, an account and the software to be shipped for the holiday season.

The idea was actually developed by Lahav Gill, who made a shirt with a flip card pinned to it. One side was green which signalled to people that he was free to talk. The other side was red which meant that he was deep in thought and didn’t want to be disturbed. Unfortunately he would get disturbed every seven minutes or so from a ringing cell phone or a new email. At that point he decided he needed both a physical and a digital solution.

The button supports iOS 7 and can be set up in no time. Users can use the button in red for 5 minutes to four hours, and a timer goes off when the desired time has elapsed.

Imagine a world where everyone had MyFocus buttons: it’d be a bit more productive, wouldn’t it?

TerraHub, a private blockchain and artificial intelligence startup based in Calgary, has been selected to act as the blockchain delivery arm of PwC Canada….