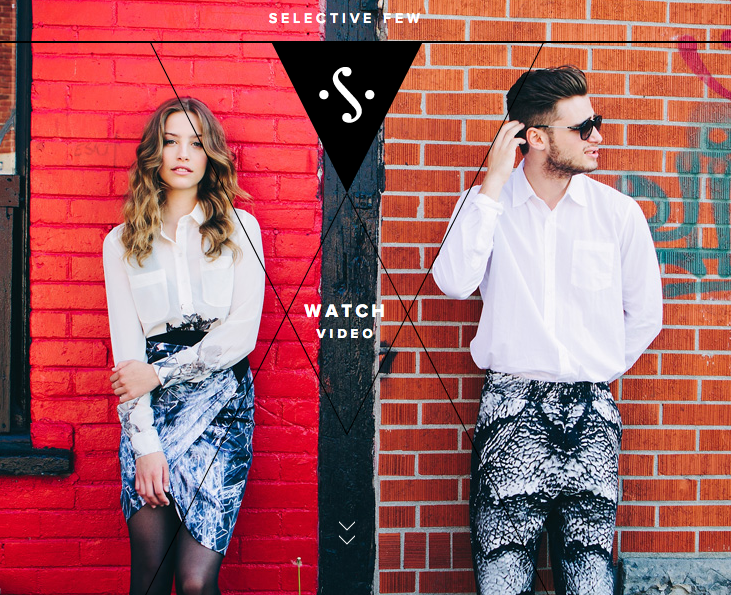 Andrew Peker was frank while dishing out his opinions on marketing independent, boutique fashion. It’s an industry that in Canada at least, hasn’t completely warmed up to the notion of ecommerce.

Like the title suggests, he told BetaKit that if you’re going to sell a $400 shirt then you better have a $400 presentation. That’s precisely what his new Montreal-based startup with cofounder Jeremy Weiss is seeking to do. SelectiveFew is set to launch in March, and will initially feature designer-picked fashion items from ten of the best independent boutique houses in Canada. Members not only get a good look at what these shops have to offer, but they get closer to the buyers, their stories and why they’ve chosen the threads they’re displaying.

“We’re a starting point for people to discover great independent boutiques from all over Canada. They can shop from them and really get to know who the people are behind the scenes,” said Peker.

The pair of Concordia alumni presented their idea at a Lean Startup Machine event a year ago and finally jumped into it in late July. Since then they’ve signed on ten multi-brand fashion boutiques who’s products will be front and centre on the site come March. SelectiveFew takes a cut out of every sale and they say it’s mutually beneficial for both parties.

The problem with independent fashion businesses and the Internet, explained Peker, is that they often don’t mix quite well. Peker said that fans of these types of stores often can’t access their products online and even when they can, it can be an unpleasant experience that isn’t engaging. Weiss added that SelectiveFew gives people a chance to buy from great boutiques that they aren’t located near, and for those who are, it gives them a chance to check out their best stuff online before visiting.

Another advantage is that shoppers get to interact with the fashion buyers, “rather than if you went to a department store and its coming down the line and here’s what they need to sell,” said Peker, 24. “These people actually went to Florence, they went to the fashion shows and they know who they bought it for, so for us it’s shortening that distance through online.”

Their competition is sites like Net-A-Porter and SSense, two of the better known and better performing e-destinations for high fashion. Peker formerly worked for SSence. In Canada, Shopcaster is also courting the same user base, a Toronto and New York-based startup that received $1 million in venture funding in August 2012.

The cofounders explained that the fashion shops are generally happy to give up a cut off every piece sold so long as their brand is maintained and well-projected. “The idea of being able to reach out to a wider audience then they’ve ever had before is great for them because they’re starting to realize that no matter what they do, their foot traffic isn’t sufficient enough and then they realize that online alone, they’re too small to have reoccurring inventory to keep people coming back,” said Peker.

SelectiveFew has also clearly bought into building a great product now and the payoff will come later, and from the sounds of it, their partners are buying in too.

“I think when it came down to speaking with the stores when we got their attention, they said ‘this is great, it solves a real problem that we have,'” said Peker. “There’s very little risk for them, we’ve branded ourselves properly and we’ve aligned our values with theirs.”

New startup Spread is aiming to make it easier for amateur photographers to monetize their hobby by providing them a simple, straightforward marketplace through…