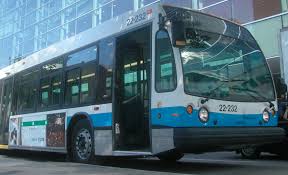 Montreal’s public transit system hosted a throng of international media today throughout the city, promoting its new Merci App as a way to both sustain users, encourage higher ridership and promote a new rewards system.

It’s all part of a plan for the Société de transport de Montréal (STM) to support 520 million rides in 2020. That’s a 40 percent increase in over the 411 million rides that the partly government-funded organization counted in 2011.

Central to this goal is the STM’s new Merci App, released in May and developed by global technology leader SAP. About 20,000 beta users tested the app before its launch.

Overall, Bourbonniere said the Opus Card campaign and its eventual loyalty program (which includes the app) came with a price tag of $250 million.

Today marked the two companies’ plans to formally push the Merci app to the media.

The STM sees the new app as a tool to engage public transport riders daily, and to keep them constantly informed about, more or less, why they should continue to ride the service. In marketing director Pierre Bourbonniere’s words, it wants to “immediately change behaviours towards public transit, but also reward and recognize those customers that are using it.”

By entering in their “Opus Card” number, or pass card number, users can see general STM information, different offers and promotions going on, as well as over 1000 different loyalty incentives from 340 brand partners specifically tailored to that user. Through users’ personal information and its most popular incentives overall, the app uses a four-step process to suggest a small number of location-based offers to each individual user. Bourbonniere also mentioned that the app can forewarn riders taking the “metro” subway service at Villa Maria station every morning at 8 AM that their faces don’t have to be crammed into the window. They can probably get a seat by arriving 15 minutes before or after. They see small examples like this as key to improving a rider’s experience, something the STM has already invested a lot in.

It’s part of a strategy to create value in the places riders are going every day, and to also increase their monthly ridership. Particularly, the STM wants to boost those riders who take about 30 rides a month to 35 or 40. And the app, recognizing the increase in rides, will offer those users greater incentives. “It’s not necessarily going to generate more dollars, but more ridership,” said the STM’s Jean-Francois Leclair. “And this is also how we’re government funded: the more riders we have the more we get funded.”

There’s nothing particularly trail-blazing about the app in its location-based incentive offers to riders, but it is refreshing to see one of Canada’s more efficient public transport systems completely embrace app technology. It’s part of an attempt to regain a recent small drop-off in ridership, and engage its firmly-placed riders.

“Around 13 percent of our customers are leaving us every year- they move, they die, they change jobs, or they buy a Hyundai Accent for $129 dollars a month,” said STM marketing director Pierre Bourbonniere. “So we’re trying to keep these people in our system, and we really get them excited about public transit and the Merci app is one of the ways to do that.”

From 1960 onwards, Leclaire said the service experienced perennially low numbers of riders, as cars became staples of Montreal family life. But between the years of 2000 and 2011 the service saw its ridership jump by a large margin. There’s a few reasons for that: traffic issues became more prevalent on the island of Montreal, and the STM began to place a large emphasis on the way it treated its riders (notwithstanding the frequent embarrassing allegations against its security by minorities and one single mother).

Leclair also offered that an environmentally-conscious ridership went hand-in-hand with efforts to promote the service as a cleaner alternative to driving cars. “There’s a lot of areas for improvement and we think we’ve had a lot of success with the connection with the environment, in making people realize that when they use public transport they contribute to the environment,” he said.

The day seemed to be primarily about SAP though, the developers of the app. About a dozen journalists were flown in from around the globe and treated to a nice stay, a bill likely footed by the global technology leader.

STM and SAP joined in a mutual partnership for the app, using SAP’s impressive back-end systems mainly for all the brand incentives that come with the app. Leclair referred to it as “co-innovation”, in that it was a mutual investment. SAP can now market its work with the STM around the world to other organizations.

Serial entrepreneur Michael Sacca is all about making sure freelancers reach their maximum potential. When he is not interviewing with successful startup founders, he…