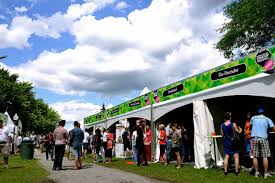 Montreal-based International Startup Festival has revealed in a blog post this week by Alistair Croll that the theme for the 2014 event will be “Startups and the City.”

No word yet if its a play on the title of the notable romantic sit-com, “Sex and the City”.

As Croll wrote, 2014’s festival will focus on “love affair between hot startups and big cities.” Part of the reasoning to select this theme was based on a few reasons, namely the growth of cities giving startups new challenges, the growth of open data, collaboration and big companies.

Here’s a few of his explanations for the 2014 theme:

Croll wrote that cities are a growth business, too. “Humanity is moving into cities. A hundred years ago, only 2 out of every 10 people lived in a city; by 2050, 7 out of 10 will. China is moving 250 million people—nearly the population of the United States—into cities.”

“The urbanization of the human race presents new problems, and of course new opportunities, for business. Startups may save cities by helping them deal with the pressures of sustainability, logistics, climate change, education, and transport. Apps can connect citizens to leaders, helping us to share, govern, and learn.”

“Cities generate petabytes of data exhaust, letting us analyze urban problems like pollution, traffic, weather and crime, which in turn can be harnessed to improve the way we architect the world around us. Balancing growth and sustainability, while anticipating shifts in population, is hard. Data can help,” wrote Croll.

“The open data movement, which makes everything from energy consumption to government financials to bus routes to snow plow locations available through free, open APIs. Because of this, the rise of dense, connected populations creates new places for technology to take hold and thrive.”

“Cities enable sharing. Most startups are technology companies, and technology has the unique ability to let us transact without friction. Humans don’t use their resources efficiently—everyone has a drill that sits idle most of the time; everyone has a car that’s parked more than it’s driven. Technology streamlines this, making better use of what we have collectively,” wrote Croll.

“It’s not just startups that are taking note,” explained Croll. “In a recent study on the future of urbanization, logistics giant DHL speculates that “in 2050, megacities have become the epicenter of social, economic and political development … While progress and prosperity are fast-paced in these new centers of global culture, rural regions have been left behind—and, in many respects, the nation-state has become more of a second-tier actor.”