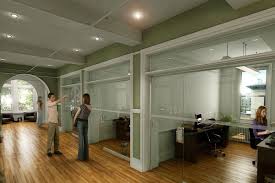 It’s been a fair amount of time since Videotron and Montreal’s “home of the web,” Notman House entered into an agreement for the large Quebec communications company to sponsor the startup hub and its fancy new renovations.

Today Videotron and the OSMO Foundation, which owns Notman House, officially broke ground on the new and improved building that now features dozens more offices, several new event spaces, a cafe and much more. The ground-breaking also shed light on the 10-year, $2.5 million partnership between the two organizations.

A release said that Videotron plans to “serve as a facilitator between local developers and its major partners,” provide special access to processes developed by its engineering and product development teams, “set up exchanges with its experts and use the opportunity to test the feasibility of some of its projects.” The agreement will also help Videotron offer “the best products and services and deliver personalized support.”

“Videotron and Videotron Business Solutions are determined to propel Québec and its developers to the forefront of the digital scene,” said Jean Novak, president of Videotron Business Solutions. “Our economy’s vigour rests, first and foremost, on the vitality of our entrepreneurial community. A few decades ago, Québec business leaders fashioned what has come to be known as Québec Inc. Today, it is our turn to join forces to support the next generation of entrepreneurs.”

It was January 17th of last year when Videotron and Notman House formally signed the agreement. In October of 2013 “Project Notman” undertook a crowdfunding effort to raise $100,000 in 20 days, the amount of cash needed to finalize OSMO’s purchase of the building through a $4.3 million loan.

Then, Real Ventures partner John Stokes commented that Montreal, once a hotbed between North America and Europe, has gradually faded in its role as a major connecting point. With the new Notman House though, the OSMO Foundation and Project Notman, with help from their new partners, are reasserting Montreal as a global entrepreneurial fixture.

New startups and various tech organizations have slowly trickled into the new offices over the past month, and its an exciting time to be around 51 Sherbrooke Street West. The resident accelerator, FounderFuel, is turning a new corner with the loss of long time general manager Ian Jeffrey as well.

But with the funding in place and the construction over it looks like Notman House is set to produce for years to come.

R|T: The Retail Times – Waiting in line at Amazon