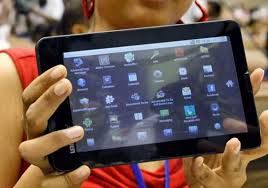 DataWind, the company that makes low-cost tablets and a leader in low-cost Internet connectivity for emerging markets, has announced that it has gone public on the Toronto Stock Exchange (TSX). The company is now valued at about about $117 million.

DataWind’s mission is to bring the Internet, which has the ability to create tremendous social and economic benefits, to billions of unconnected people in the developing world. The Company’s Internet Delivery Platform offers a low-cost Internet browsing solution by bundling an affordable tablet device with an inexpensive, pre-paid, 2G Internet service plan.

The UbiSlate 7Ci is the company’s cheapest 7-inch tablet with cellular connectivity and costs around $38. There’s also a 9-inch tablet UbiSlate 9Ci as well as DataWind’s first 3G device UbiSlate 3G7. All 3 tablets are supported with voice call facility.

The initial idea was to develop an extremely low-cost tablet for the Indian market.

The DataWind IPO comes close after Kinaxis Inc, an Ottawa-based software company that raised close to $100.6-million via an IPO and a secondary offering.

Meanwhile other Canadian tech companies like Hootsuite and Shopify have long been looked at as suitors for an eventual IPO, but nothing has been announced yet.