For people seeking quiet spaces to work or relax in the hustle and bustle of New York City, Julien Smith, an author and former journalist originally from Montreal, has an answer.

Earlier this year, Smith launched Breather, a startup with dual headquarters in Montreal and New York City that will grant people access to quiet spaces to chill in the Big Apple. The startup — which Smith unveiled in early June at Le Web 2013, Europe’s annual technology conference, in London — will allow users to book rooms or mini offices, in a sense, and unlock them with its app, soon to be available on iOS (and later, Android) devices.

“Breather comes from my personal obsession with quiet and high quality private space,” Smith explains in an interview with BetaKit. “It took me a long time, thinking about what would happen in the future of space.”

And then, the idea for Breather just hit him. He sketched out the idea on a piece of paper at a bar and he got to work.

The app, which is in its beta version right now, is aimed at anyone seeking quiet spaces to work or relax, and who is “sick of doing everything at a Starbucks,” Smith notes.

“Basically, it’s peace and quiet on demand,” he says. “The goal of Breather is to give people space in increasingly densely populated places. Cities are getting loud and difficult to manage, and we want to give people a break” or, literally, a breather. “We allow anyone to download the app and reserve space. It is there to democratize your city for you.”

Smith says he chose to launch in the U.S. first – specifically in New York City – because “it’s the biggest, densest market for private space in North America.”

In terms of how the app works, Smith notes that Breather has partnered with Lockitron and August – a lock system startup – to put electronic locks on rooms across the city, which can be unlocked using the app. “[The app] allows space to open and close on-demand, from anywhere,” he explains. “We manage the spaces to ensure they’re clean and up to standards and you use them whenever you like.”

If you want to work quietly, hold meetings or simply relax, you can. Each room is equipped with a desk, a couch, electrical outlets and Wi-Fi. There’s even enough space to do Yoga.

While the app is free, using the room will cost around $20 an hour depending on the city, Smith adds.

Breather has recently raised $1.5 million in a seed funding round led by Real Ventures in Montreal, with contributions from angel investors such as Gary Vaynerchuk, Loic Le Meur and Mike Walsh.

Although the app is starting out in New York City when it officially launches in the fall, it will be rolling out in other cities such as San Francisco. And Breather is testing for a Canadian launch too. “In a few months, it’ll be out in the wild and you’ll be able to grab space in select cities,” Smith says. 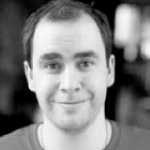 Samuel is a freelance journalist and communicator from Toronto. He covers a range of topics such as occupational health and safety, education and technology. His work has appeared in OHS Canada magazine, Jobpostings magazine, York Region papers The Liberal and The Markham Economist and Sun, and on blogTO. Samuel also freelances for Coderella Consulting, a San Francisco-based PR agency and, in his spare time, serves as Communications Director for Stutter Social, an online support group that uses Google+ Hangouts to connect people who stutter worldwide.