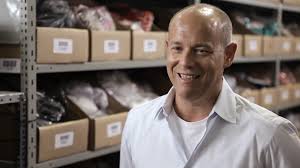 Several Montreal startup leaders will chat about the power of innovation and creativity in business this Thursday night Novotel Toronto Center Hotel.

Yona Shtern, CEO of Montreal flash-sale fashion site Beyond the Rack will join LP Maurice, the founder of Montreal startup Busbud, which list sells bus tickets online for destinations around the globe. Moderating the panel will be Monica Ruffo, the CEO Lowe Roche, a marketing and advertising company in Toronto.

Those in attendance are in for a treat when they listen to Shtern’s talk. A natural-born story teller who has a knack for getting audiences listening to his every sentence, Shtern will have a ton of good advice on the subject of innovation and creativity. This is a guy who literally spent his company’s last $5,000 on a plane ticket to Vienna to convince a German investor that his ecommerce fashion play would be different. Beyond The Rack has hit $100 million in revenue in the past few years.

The talk is being organized by the HEC business school at the Universite de Montreal.

Under Shtern and cofounder Robert Gold’s command, Beyond The Rack grew from four employees to 230 today. Over 9.5 million people call themselves members.

In 2002, Shtern was a young McGill University alumni, and noticed while travelling in Europe that flash sales for luxury goods was gaining ground.  At the time sales where luxury goods were sold at huge markdowns in limited quantities for brief periods of time were relatively new, but today the industry is well-populated. By 2007 Shtern had cofounded Beyond the Rack.

Meanwhile, Montreal’s LP Maurice will trade opinions with Shtern. Over the past year Maurice has cleverly positioned himself as a go-to source in big media for his voice on matters everything startup. His company, Busbud, was founded while he was backpacking South America in 2011. Travelling mostly by bus, he grew frustrated with trying to find carriers, and their schedules online. He sketched out his business plan while on a 10-hour bus trip in Argentina and the result was Busbud. It’s a website that pools inter-city bus routes and schedules from around the world. Busbud has recently emerged from the Canadian Technology Accelerator program in New York and has grown from three to 15 people.

The talk goes down this Thursday night at  6 p.m.